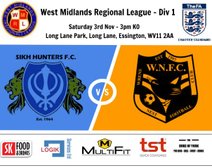 Three wins on the bounce for Lovatt’s Lions

Sikh Hunters continued their recent rich vein of form as they swept aside Wrens Nest on Saturday and moved up to fourth in the WMRL Division One standings in the process.

Having scored 22 in their previous two fixtures, Hunters started full of confidence and were ahead in the first couple of minutes. A scuffed Chetan Singh Goray corner was flicked on by Ben Lawley and Dan Jones was on hand to sweep home from close range.

The home side doubled their advantage on the quarter hour when quick thinking from Singh Goray from a free kick played in Ashley Smith and he fired home.

Two became three on the half hour mark and it was a goal of fantastic individual brilliance. Hinesh Patel picking up the ball and beating defenders at will as he mesmerically danced his way through before rounding the goalkeeper and tapping into the unguarded net. A goal of real beauty.

Into the second half and it was still one way traffic and it was a surprise that Hunters didn’t get on the scoresheet again until ten minutes from time.

Substitute Liam Dawson scored the fourth with his first Hunters goal before Connor Archer sealed the victory with his second goal in as many games, slotting home after the goalkeeper had saved his initial effort.

Hunters now have a double header against Wellington Amateurs to look forward to. Firstly in the League with a 3pm kick off, followed by a League Cup encounter on Tuesday with a 7:45pm kick off, both at their Long Lane home.