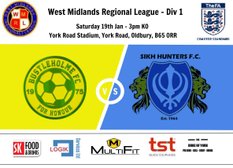 Sikh Hunters maintained their 100% record in 2019 as they comfortably put Bustleholme to the sword on Saturday, the 7-3 scoreline the sixth time Hunters have hit five or more in a league game this season.

Hunters were unchanged from Tuesday's League Cup win over local rivals Wyrley United although there were a few changes of personnel on the bench including a spot for club stalwart Harmandeep Garewal.

After an even opening couple of minutes, it was the hosts who took the lead. A free kick into the box wasn't dealt with by the visitors and the ball fell at the feet of the Bustleholme centre half who slotted home from 8 yards. This seemed to spur Hunters into action and shortly afterwards Hinesh Patel played in Tyrone Atkinson but his side footed effort was tame and the keeper saved. Hunters didn't have to wait long for their goal however as on 12 minutes, Patel slalomed into the box down the left beating three players and with Hunters supporters shouting for a penalty after the third defender clearly brought Patel down, a parried shot saw the ball land invitingly for Justin Nisbett who duly stroked home to level the scores.

Not satisfied with an equaliser, the away side continued to push forward and just three minutes later were presented with an opportunity to take the lead. An Atkinson pass seemed to be running away from Patel in the penalty area however the little schemer managed to get a toe to the ball before being clumsily bulldozed over by the home goalkeeper and a spot kick was awarded. Atkinson stepped up to drive into the bottom corner for 2-1.

It was now all Hunters and a couple of half chances went begging from Patel and Ben Lawley before a two minute spell just before the half time interval effectively ended the game as a contest. Firstly, Patel was at it again when picking up the ball 40 yards out, beating the last defender with ease before the drawing the goalkeeper and poking past him into the corner for 3-1 before the home side were reduced to 10 men as their captain picked up two yellow cards in as many seconds for dissent at the referee.

The second half got underway with the freezing cold conditions getting worse and they appeared to catch Hunters out as they began sloppily and were duly punished when the home side halved the deficit with a penalty of their own after Atkinson was adjudged to have handled in the box. The Bustleholme striker sent Liam Haynes the wrong way from the spot and potentially game on at 3-2.

Hunters then went up a gear to put the result beyond doubt. Patel once again the creator as he sped down the left before unselfishly squaring for Nisbett to slot into the empty net for 4-2 and moments later playing in Atkinson whose initial effort was saved before he stroked the ball home for 5-2 with still over half an hour left on the clock.

Two goals in three minutes around the 70 minute mark added some extra gloss to the scoreline as a fantastic long ball from Todd Perry was taken down well by Dan Jones before he advanced and confidently stroked past the keeper for 6-2 before top scorer Nisbett completed his hat trick under a neat finish under the keeper after being played in by Ashley Smith.

The home side completed the scoring with a well taken effort from the edge of the area but it was scant consolation as Hunters coasted to a 7-3 victory.

Hunters return to their Long Lane Park home on Saturday as they again face rivals Wyrley United in the final 'Battle of Long Lane' of the season. With two victories so far this season, they'll be hoping to make it a hat trick of their own. Kick off is at 3pm.