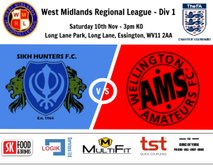 Sikh Hunters made it 4 WMRL Division One wins on the bounce on Saturday with a 3-2 victory over Wellington Amateurs in a pulsating encounter.

Fresh from scoring 27 goals in their previous 3 games, Hunters flew out of the blocks yet somehow didn’t open the scoring in a crazy opening 5 minutes.

Firstly, Mitch Lawley hit the post with barely a minute on the clock before the same player thought he’d opened the scoring just moments later however the linesman adjudged a Hunters player to be offside although the player in question didn’t appear to be interfering with play. Then on 6 minutes, Hinesh Patel went on a customary mazy run into the box and was brought down for a penalty. Chetan Singh Goray stepped up and although hit well, his effort was a good height for the goalkeeper who saved away to his left.

Wellington were starting to ease into the game although Hunters were having much more of the ball and it was against the run of play when the visitors took the lead midway through the half, the Wellington player dinking a cute finish over the advancing Liam Haynes in the Hunters goal. This was a goal which ended a run of over 300 minutes without conceding for the home side and a lead which the visitors held until the interval.

Into the second half and again it was Hunters who started the half well, early efforts from Dan Jones and Tyrone Atkinson were well saved before Wellington were awarded a penalty in the 54th minute as Ashley Smith committed a foul on the Wellington striker. Haynes dived down low to his right and palmed away the effort, much to the delight of his teammates to keep the score at 1-0.

The respite was only brief however as Wellington doubled their lead on 62 minutes. An attempted clearance by Ben Lawley inadvertently played in the Wellington striker and he lobbed over Haynes to make it 2-0.

Hunters needed to respond quickly and they did just that, halving the deficit on 66 minutes when Jones raced onto an Atkinson pass, knocked the ball over the advancing keeper and then stroked into the unguarded net. He almost had another just two minutes later however a fantastic last ditch challenge from a Wellington defender denied him.

The game was now becoming stretched as Hunters searched for an equaliser. An equaliser they duly found with 7 minutes to go. Some intricate play on the edge of the area between Jones and Patel released the latter to the Wellington byeline. He cut the ball back to substitute Sanjay Malhi who curled the ball home left footed into the top corner.

The home side hadn’t finished yet and continued to throw bodies forward and had looked set to be frustrated by some heroic visiting defending and the goalkeeper. However deep into injury time, that man Patel run into the box from the right, held off a couple of challenges and smashed the ball into the top corner from 10 yards, cue jubilant scenes for the Hunters players, management and supporters alike.

3-2 it finished and an immense showing of pride, courage and commitment by the home side. They’ll need all of those things again on Tuesday as they face the same side in the WMRL Division One League Cup. The game is again at Long Lane, kick off at 7:45pm.