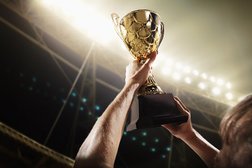 "The Invincible Vets" finish the job

Last game of the season for the Singapore Vikings was against TGA. The last encounter ended up with a 2-0 victory but only with goals scored towards the end of the game. A draw would clinch the Vikings the Championship but the team selected for the day showed that only a victory counted:

Before the game the Vikings coaching duo analyzed the opponent. Surprisingly TGA was without their buff ass striker but several other good players, not fielded during last encounter, made the team look stronger overall. Luckily the Vikings Vets, hungry to bring back home the Championship, were ready for action!

With Stabell manning the mobile TV Tower the kick off whistle sounded!

The Vikings Vets did extremely well in passing around the ball. The first five minutes must have seen a 80% ball possession for the Vikings. The first chance came after a long throw, Madsen passed the ball to John, but despite the classic body feints the defender did well to tackle the ball out for a corner. Stereo almost scored from the corner but a defender blocked the header on the line. The next corner again saw Stereo win the header and the keeper had to make a good block to save the volley from Mark vD.

About ten minutes in John received the ball in the box, he turned, he scored, he smiled. Out more than half the season due to injury and yet top scorer in the Vets league, we present to you, John!

TGA wasted no time and managed to launch a few good attacks on the Viking goal. First a hard free kick missed the goal and then a loose ball in the small box was not finished properly, allowing for keeper Rene to catch easily.

The Vikings fought back and but chances from both Mark vD and Stereo resulted in no further goals. Crouch also dispatched a true fireball towards goal but unfortunately the ball clipped the top of the cross bar.

TGA then managed to get back into the game after a ball found its way to an offside striker (2 meters) and with the whistle remaining silent the striker, alone with the best Vets keeper in the league, Rene, the striker drew the game. 1-1.

A draw would still secure the Vikings the Championship but with a good 45 minutes of playing time left it was still exciting. The two spectators from 1TM surely was sending live updates back home.

The sun was hammering down but the large Viking bench made it possible to keep energy levels high and the pressure on TGA the same. TGA only had a few subs, one of which got semi injured early on, so the high pressure tactics would surely pay off eventually, as proven the case throughout the season against other teams.

Just before half time John was close to break free but a great tackle prevented the Viking top scorer from adding to his tally.

After a strong motivational speech from Coach Kalle, which included the words “let’s run them over”, the Vikings came out with fresh legs from the bench. TGA fielded lacked subs but the team was quality and the fitness level quite so impressive.

It was a very even game with attacks in both end but it was still the Vikings that looked to have the upper hand. John had a big chance after a long throw but he just missed the far post. Rafa made a good run but his non existing left foot forced him to make the dribble and the right foot shot lacked power.

Lasse, central defender, made his way forward and received the ball from Vind. Despite being tackled just outside the box Lasse managed to control the ball and with a hard shot, which in a straight line would have hit a school class window far outside the goal posts, he hit a defender and the ball reflected into goal. No chance for the strong TGA keeper. 2-1 for the Vikings.

With twenty minutes to go the Vikings got more and more in control of the game. The strong bench surely made a difference against a TGA team had to keep up steam for a full game without break.

Stereo connected to yet another corner but the ball was cleared on the line by a defender, again. Rafa should be sad about not having Morten Andersen (American football) on the stands as he blasted the ball miles over goal. Quality field goal.

With about five minutes left Vind made a sharp pass down the right flank just out of reach of the TGA left back. Rafa reached the ball and after a small touch he crossed the ball into the box, hard. At the first post John, under pressure from a defender, connected with the forehead and scored the 3-1 goal. A fantastic Singapore Vikings Vets team work goal. Golazo.

TGA kept fighting bravely but despite a few set piece chances they failed to really test Rene in goal. The ref looked at his watch, placed the whistle between his lips, and blew the final whistle. The dream had become true. The Singapore Vikings Vets was Vets league champions. Unbeaten for an entire season. 50 points secured out of 54 possible. Needless say it is expected that the club will do all it can to renew the contracts with coaching duo Kalle and Hax.

Thanks to TGA for a great game. No doubt was this one of the most competitive games of the entire season. If TGA manages to get a few more players on the bench it will be a strong force in the upcoming season.

Thank you also to the spectators from 1TM for congratulating our team with the victory. Class act.

See you all next season!