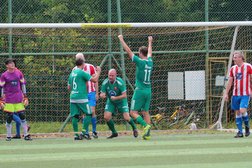 Vets in the "New Old Firm"

The top clash between the Vikings Vets and 1TM was long poised to be the most deciding game of the season. A true 6 point drama. A game that in a not so distant future may be known as the "New Old Firm", given that the rivalry is not all that old but on the same time we are not young either.

The Vikings brought a strong squad for the game and it did not take long to spot several hot shots in the 1TM line up.

The game started with 1TM in charge. The small pitch allowed them to put high pressure and close down the Viking midfield and defense. As a result, 1TM managed to get a few decent shots on goal but Rene was vigilant as always.

The Vikings pushed tried playing the ball down the wings but 1TM defended well and prevented crosses from being made. However, what they soon found out was that Dragon can throw harder than most can kick so throw-ins kept flying into the box. The 1TM keeper did very well to protect his goal.

The first real Viking chance fell after a corner when Hax first timed the ball towards goal. The ball deflected off a 1TM defender and went out for another corner… or goal kick as decided by the ref.

Shortly after the water break the Vikings defense lost concentration and the tall striker managed to push the ball across the line. 0-1 for 1TM.

The Vikings now had to push for a quick equalizer and from another set piece situation John showed quick reactions as he headed the ball into the net. The game was levelled at 1-1.

Soon after followed an incidence of extremely sloppy work on the Viking midfield. A drop ball was glazed at as if it was an angel falling from the sky, nobody f****** moved, and a midfielder could take it down and with enough time spare to make a sandwich passed the ball over the Viking defense to the striker, who chested it down and buried the ball. A nice goal but oh dear the Vikings looked poor. 1-2 for 1TM

As that was not enough, a 1TM set piece that was first expertly headed on by the tall striker, Crouch, and their striker followed it all the way to the back post, without a Viking defender trying to stop him, and headed in the 3-1 goal.

Just before half time the Vikings missed a massive chance from another one of Dragon’s long throw ins. John apparently used up all his quick reactions as he missed a free header at the back post.

At the half time break Coach Kalle and Coach Hax did their best to keep the spirits high. Also, the game tactics were changed, so to better close down their dominant striker, and a few changes were made in the lineup.

The new tactics proved to be exactly what was missing. The Vikings gained better control of the midfield and managed to push 1TM a few meters back on the field. The Viking defense had more time to build up and with the fresh legs on the midfield, from Vind and Engaard, the game looked to be turning.

With only one striker position, reserved for our 50 year birthday vet John, Stabel had to play on the right wing. Stabel did the best he could to stay on the wing but still he was often spotted inside the box. That turned out to be fortunate as he on half a chance, with the furthest bit of his toe, managed to flick the ball over the 1TM keeper. 2-3 and the game was on.

The Vikings now had the initiative. 1TM looked surprisingly tired, except for their young’ish French midfielder who seems to never get tired, and the Vikings chances starting becoming more frequent. Vind stole the ball on the midfield and chased towards goal. He made a razor sharp pass to Lasse, who alone with the goal keeper waited, and waited, and then finished in the middle of the goal onto the goal keeper. Not only did he miss a huge chance, he also managed to win 1TM a goal kick as the ball bounced back off his legs.

1TM played very well but still it was the Vikings dominating. Engaard found his way to the left wing and swung in a perfect cross, just out of reach for a defender and goal keeper, and Marck came flying and first timed the ball into the roof of the net. 3-3. The Vikings were back in it.

1TM knew they needed a win so they pushed an extra player up front. Their game was concentrated around their expert target man and he continued to create problems for the Vikings. Luckily none of his headers fell down in good positions for the 1TM players.

The extra space on the midfield was very apparent with the Vikings having easier runs on goal once cleared away in the back. Dragon ran towards goal in full speed, with a Viking player running in position both left and right, but he decided to release a weak shot on goal, which was easily saved. John also had a big chance but the space got too tight. Finally Dragon missed a good opportunity from a header, one where he complained not bring told how free he was. Sorry for not pointing out the obvious.

The game ended 3-3, which felt like a victory after coming from behind, the way vikings like it best, but still felt like a better result was very possible. 1TM has an excellent team, they play very well together, and always go for the win. The soon to be called "New Old Firm" will always offer a great display of competitive football. We look forward to many great games in the future.

Also thanks to all the Vikings supporters from the game. Truly appreciated!