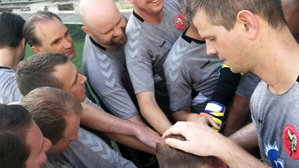 With the Ref arriving late the game was delayed a good 25 mins, which turned out to be lucky as our dedicated Live match reporter, Stabell, made it just in time before kickoff.

First half
The game started with the Vikings mostly in possession. The Germans stood pretty deep so it was difficult to break through but there was decent space outside the box. John made a good back pass to Elbo, who with a hard shot nearly put the Vikings in the lead, nearly. Marck also had a shot from outside but also he was unable to hit the target. After 10 minutes the game was still leveled.

The Vikings continued the pressure and won a corner. Crouch swung it in hard and John, all free on the far post, nodded in the 0-1 lead.

The sun was hammering down and the Viking coaching duo decided to sub already at the water break. Three fresh, sort of, pairs of legs fielded. After the water break it was a fairly even game. The Vikings continued to create chances but the Germans were slowly fighting their way back into the game. Especially their strong, and very young Vets player, on the midfield was a dominating force that created lots of trouble for the Vikings. The last ten minutes of the first half belonged to the Germans and only Rene in the Viking goal prevented an equalizer, or worse, with three really good saves.

Second half
Second half started as the first ended. The Germans had the momentum and once again it was their strong midfielder that took the lead. A German corner was cleared but the following cross into the box was headed in behind Rene. 1-1.

We had to shake up the game and with a few subs, and application of high pressure tactics, the game changed. John, and Kalle just behind him, were chasing the ball and after some sloppy defending John stole the ball and gave the Vikings the lead. 1-2.

It continued to be a very even game. The Germans were certainly not giving up. A long ball towards the Viking box was picked up by a German striker, who controlled the ball and lobbed it over Stereo in defense. Stereo tried to tackle the ball but instead caught the foot. Correct penalty, which was converted safely. 2-2, with the Germans looking strong.

The last water break and a few tactical changes made. Crouch was put back on the central mid to clean up, Dyson style, and CJ and Marck on each wing to add some sexy technique. Soon after John received the ball down the right flank. John could have finished on goal but instead he passed the ball to Kalle, who was in a better position. Kalle wasted no time and increased the lead. 1-3 for the Vikings.

As the game progressed towards its last 10 minutes, and despite the Viking lead, it was still a very exciting game. Both teams had large squads for the game so the intensity was high all throughout the game. However, the heat was slowly taking its toll. A ball was cleared from the Viking half and John, alone on top, was slowly walking back expecting to be called offside. Surprisingly, the German left back was hanging way behind in defense and thereby interfered with the German offside trap. John turned around, controlled the ball, and buried it for the 1-4 lead.

Last chance of the game came from yet another Viking corner where Marck from the first post put his head to a hard cross. 2-5. Flabbergasted.

Soon after the final whistle sounded.

As the report depicts, the final score does not represent the course of the game. Overall it was a very even game that was decided only towards the end. Thanks to the Germans for a very competitive game. It was a very strong opponent; one that with the same lineup can steal points from any team in the league.

Good performance from the Ref also, besides him being well late for the game.