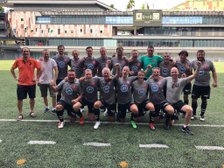 The great clash against 1TM took place at the amazing OUR TAMPINES HUB venue. The HUB houses a proper FIFA endorsed stadium that seats 5,000 spectators and is the home of Tampines Rovers FC. Almost every Viking first stepping onto that pitch felt obliged to say the words “my name is Maximus Decimus Meridius, commander of the Armies of the North, General of the Felix Legions and loyal servant to the TRUE Viking president, Michael Joergensen (Rafa).

1TM looked to have rolled in several young’ish Vets for the derby against the Vikings and we of course noticed their high tower Crouchy still dominating the skies with his bald head. We wonder if also he would still be a virgin had he not been such a great footballer. The game was kicked off and 1TM played extremely aggressively and somehow took the Vikings by surprise. High pressure, everywhere, and very fast paced game. Basically, the first 20 minutes was one long siege of the Viking box and only once did the Vikings threaten the 1TM goal, which actually was very close to resulting in a goal. In the other end, however, and after some passive Viking defending, and some fortunate touches, 1TM to the deserved lead just before the water break.

Slightly shocked with the outcome of the starting 20 minutes the Vikings made a few changes to the lineup and the impact came instantly. The Dragon powered his way through 3-4 1TM players and John hammered in the loose ball to tie the game. Shortly after the Vikings were back in control of the ball, a few quick passes up to the attack, and a slightly clumsy tackle on MER, from behind and inside the small box, resulted in a penalty. John stepped up and gave the Vikings the 2-1 lead.

The remainder of the first half belonged to 1TM, winning almost every header and second ball, but the league standing does not lie… it is difficult to score against the Vikings. Elbo and Just stood strong in central defense and Rafa/Buck/Hax did their part to close down the wingers. 1TM had little success hitting their main weapon in the box, Crouchy, and any shot dispatched from outside lacked both precision and power. 1TM did manage to put the ball in the net but the goal was correctly disallowed for offside. The first half ended 2-1, with the Vikings holding the lead.

Second half introduced a few more changes to the Viking lineup but the game plan remained the same. 1TM got the best start of the half, after some mistimed tango steps gave 1TM a huge chance, but Elbo made a crucial tackle to prevent the shot on goal. The corner, and several others, were either headed away or Rene would come out and punch the ball away from danger. 1TM had the bulk of the possession but the Viking defense, including the midfield, allowed very little space for the otherwise strong 1TM players. Some well-timed Viking tackles, both standing and sliding, prevented 1TM from making that critical through pass and the frustration was slowly building. The Viking defense stood well and was not planning to give anything away.

Being under pressure the Vikings focused on counter attacks and with some truly great cross field passing, and corresponding running, the Vikings created several dangerous changes. The 1TM keeper did really well to get out of his goal to prevent Dragon from scoring and Nagel should expect an invoice from OUR TAMPINES HUB after digging that hole in the turf with his miserable shot, completely alone with the keeper! 1TM, chasing the equalizer, sent many players forward but this created lots of space in the back, oftentimes leaving John and Dragon with only two defenders. One of counter attacks resulted in John holding the ball just outside the 1TM box, where he was taken down by a defender. 1TM put many players in the wall but with the keeper hiding behind it he had little time to react to the hard shot from Dragon, that went in by the far post. 3-1 to the Vikings with only 10 minutes to go.

1TM kept pushing but the Vikings resisted; the final score remained 3-1. The Viking could raise their arms in celebration and 1TM could only contemplate on what could have and probably should have been. 1TM is a great team full of quality players. The Vets league is getting increasingly competitive and it is a pleasure to be a part of.

Thank you to 1TM for a very competitive game. Also thanks to the ref and linesmen for coming out to ref on such hot day.