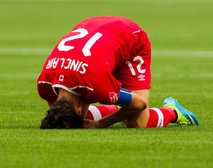 Bullocks! It's looking increasingly difficult for the Vets to their league title with 2 more points lost - this time against a well-organised Anza team who were very dangerous on their counter-attacks. Coming from behind twice (at 1-0 Anza and 2-1 Anza) with good solo actions from Mikkel and CJ, a 2-2 end result doesn't sound too shabby. However, with more than 10 decent chances to score and 2 goals denied by the ref, it's safe to say that most Viking players were disappointed after the game.

Real Ale are looking very strong at the top of the table with 12 points after 5 matches (Vikings have 7 points after 4 matches) so we must pick up our game immediately. We regained much of our fighting spirit against Anza with especially MOM Marck Madsen being very vocal. Let's channel this spirit into goals for our next game!

I'll leave you with a post-game comment from our goalie So: "Stop complaining to the ref and instead get on with winning the game ....it's been a while since we deserved beers after a game....and these are my favourite beers to drink"

Come on Vikings! Let's show we still want to defend our league title.