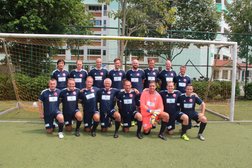 In an effort to keep up with 1TM FC legends in the top of the Veteran league,

In an effort to keep up with 1TM FC legends in the top of the Veteran league, Vikings had to take 3 point against a British Exile team struggling in bottom of the table. I would turn out to be a bumpy ride…
After only 30 seconds of play, Vikings found the net and everything looked like an easy day at the office. 2.5 mins later the score was 1-1. Despite having the majority of chances Vikings still managed to find themselves trailing behind during the match by a few top class goals conceded against a defenseless So in goal. It was not until very late in the second half the vets team saw a two goal lead to 5-3 that eventually would secure the win.
The match also saw new Viking player Hax come in from the bench and show solid header capabilities that ultimately resulted in a Maritime Marck goal, Claus managed to put one in as well also coming from a bench position after struggling most of the match to find the match location. Locomotive and John took care of the rest. MOM was brought home convincingly by Moberg.

Thanks for Exiles for great Saturday afternoon. Nice lads and clean fighting all over.