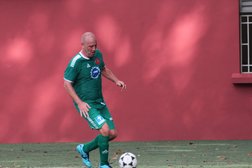 Top of the table clash

When looking at the league table before the game, we knew we were in for a tough tough game against current leader TGA.

The game started with TGA taking the lead by winning the midfield and pushing as quite far back on the pitch. They had a lot of great passing and quickly managed to create a couple of chances by running through the Viking defence.

It was also TGA who managed to take the lead early in 1st half with a great cross from their right side that made it to their attacker who hit the ball into the ground and thereby lobbed our keeper Rene who had chosen the right side.

Only minutes later the same recipe found a TGA striker alone with our keeper but a fantastic save by Rene kept us in the game.

Vikings were rare visitors near the TGA goal as most passing was interrupted by a hard-working TGA halfway into their half but we did manage to get a corner kick roughly 15 minutes into first half. Crouch kicking a long flyer into the box and John rose to the occasion and luckily also the ball and made it even at 1-1.

We started to gain more confidence and saw a chance to get back in the game until the ever dangerous Spanish striker Pablo found a long ball over Rafa’s head and he made no mistake in slotting it in to make us go down 2-1.

Coach decided to change the strategy and the formation from our usual 4-5-1 to 4-4-2 by giving a warm welcome back to our striker Locomotive aka Stabell who went on with 5 minutes to go of first half.

That proved to be a smart move as Stabell scored a great goal from the edge of TGA’s box over the keeper on his very first touch of the game. Equalizer to 2-2.

The Vikings bench hardly managed to get their arms down until Stabell copied his first goal by lobbing the TGA keeper a second time only from the left side – Vikings up 3-2 at half time.

The second half saw both teams fighting the intense heat and but giving the spectators a fantastic vets game to watch. There was plenty of action, chances and great play with the game changing sides frequently.

TGA managed to equalize on a great freekick from 25 yards which made the result 3-3 which stood till the end.

A fantastic top clash that showed the quality and intensity that a vets game can deliver. I believe the result was reasonably fair and TGA proved to be worthy opponents and will be a team to look out for at the top of the table. Well played TGA – we look forward to the return match and also a cool performance by the ref.