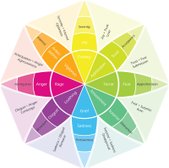 A Night of Mixed Emotions

Whether we draw on the work of late twentieth century psychologist and philosopher William James or align ourselves with the later offerings of the Lazarus partnership one thing is for sure, emotions are real and extremely difficult to categorise. Current academic thinking suggests 48 classified emotions, I think it's fair to say that the players, coaches, referees and supporters of both teams experienced a high number of these during this roller-coaster of a game. Vikings and Aioli both lined up with a number of players absent either through travel or F1 entertainment commitments and boy did they miss out on a humdinger of a game. The fixture proved to have far more twists and turns than the Singapore Street Circuit. Much of the pre-match Viking chat had centred around the topic of pressing high, shooting early and playing the game in the opponents half, we are a big and physical side who fancy our chances when set plays come our way. I'm sure Aioli's discussions would have focused on their miraculous recovery the previous week to share a point with the unbeaten GSAS team and the need to build on that. The game started minus one linesman who was a no show, the ref deciding that Vikings would not have the benefit of an official in their defending half? A strong start by the team in red saw a number of early chances and it was only few minutes in when our hairy dragon launched a mammoth throw which hit the onrushing Magnus M on the back of the head before bobbling past their stranded keeper - the lead was ours. Vikings were in pole position and intent on extending their lead, a bouncing ball out on the left arrived at the feet of Dragsbaek and his first time effort went high into the night sky, dropping handsomely over the head of the keeper to double our lead - a spectacular 35 yard effort which is surely an early entry for goal of the session. Feeling that there was more to come, Vikings pressed hard and Mele had a glorious chance to put the game to bed but an excellent save denied us. 30 min had flown past and little threat had been posed by Aioli. The final 15 min of the half were played out but early signs of what were to come became apparent, some excellent midfield play through Aioli's JJ asked very difficult questions of our defence. Half time arrived with us leading 2-0 but well aware of the threat that Aioli would pose in the second half. We were not wrong, our opponents became comfortable on the ball and started to play with a swagger and confidence that had been missing in the earlier part of the game. We found it tough to gain possession and when we did we gave the ball away cheaply. Our comfortable lead was being chipped away at and it was only a matter of time before Aioli would reduce the deficit, they duly obliged and their race was back on. What followed was a 20 min ferocious battle in the middle of the field, a number of crunching tackles and all or nothing attempts to wrestle control resulted in the referee entering his busiest period of the night. Aioli fashioned a number of good openings and only an excellent save from Bart denied them an equaliser. At the opposite end a series of breakaway efforts resulted in a number of near misses. With 5 min to go a well weighted pass from Karl M saw Meli go clear, a 360 pirouette on top of the ball took him past the final defender before he expertly dinked the ball into the back of the net. Relieved and delighted with this fine finish all of the Vikings ran over to congratulate him on his goal and to celebrate the hard fought win...........
Unfortunately football isn't quite so simple as that, what was to play out next explains why the psychologists and philosophers mentioned earlier have spent so many late nights in search of categorisation of emotions. 3-1 up with 2 min to play and a ball from the right arrives in our box and is dispatched into the bottom corner, mild panic 3 - 2 unexpected hope. It would have been an ideal opportunity to call a timeout had it been a basketball game but with no such luxury the game was resumed and within three timid passes and a blink of an eye the ball was once again in the back of our net- embarrassed grief 3-3 ecstatic amazement. All emotions had been exhausted and there couldn't possibly be any more to experience could there....... Wrong!! With a huge Kasper punt the ball was beautifully controlled and laid off by Mele to the feet of the highly charged Rune who coolly rounded a defender and slotted it away - Elated 4-3 distraught. There was no time for the restart as Vikings crawled to the finishing line and received the chequered flag, the race was done.

Thanks to the officials who had their work cut out in controlling a hard fought match and to Aioli who played some wonderful football at times and never gave in.