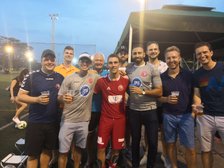 A game of to halves again!

Without doing too much of a dishonour to TGA Rangers I’m going to forget reporting on the first half performance and concentrate on the game from the break onwards – reliving the errors that we made during the opening 45 min and reporting on the great play by our opponents will just be too painful!
0-4 and heads down Vikings trudged off the Turf City pitch shell shocked at what had just happened. This was supposed to be a celebration day with good support present and free beers on offer, for our part we needed to get back to winning ways after previously losing our last two games. The starting squad looked strong and the previous week’s confident performance against SCC meant that there was an air of optimism amongst the rank and file. Tough words were spoken during the break and players were asked to decide whether they were happy to walk off with a heavy defeat or show some fight and try and salvage our pride from the second half. Despite being down by four I mentioned to the team that it didn’t feel the game was over when watching from the side-line. We changed our formation to three at the back and were intent on having a go at our dominant visitors. The game became a much closer affair with both teams enjoying a number of chances, TGA breaking through the speed and trickery of Sharples and Vikings via the strong passing of Hotski who started to pull the strings. After around 10 min of the second half an excellent long pass from Magnus on the right picked out, a gravity defying, Dragon on the far post and his looping header wrong footed the keeper and landed high into the top corner of the net, a consolation goal at least! During the break the team had been encouraged by Dragsbaek to go out and win the second half and here we were 1-0 to the good! Even better was to come 10 min later we were awarded a free kick 20m from goal which Hotski duly dispatched beyond the diving keeper to give us hope, 4-2 with 25 min left! What was needed at this point was a self-belief and a confidence to keep playing and ensure that we did the simple things well, this was not to be the case as an in swinging corner from the left saw an unmarked substitute head home easily inside our six yard box – game over surely. Vikings, although annoyed, dusted themselves off and had a real go at the team in white, we were starting to move forward at speed and openings started to appear in the previously tight TGA defence. Meli, kept up his goal a game average when he met a corner at the near post to guide the ball into the back of the net reducing the deficit to two once more. With 15 min left on the clock Vikings got the ball forward at every opportunity despite the constant counter attacks from TGA which looked extremely dangerous. With 8 min + injury time left a long ball over the top saw Tjalfe go clear of the last defender, a coming together of the two resulted in us being awarded a penalty. The general feeling on the side-line was that should we score then there was enough time left to go all out and try to secure an unlikely point from the game. It was not to be, the goalkeeper saved well to his left and our follow-up went well over the bar! The final minutes were played out but our chance had gone, it was not to be!
It goes without saying that TGA are a great team and play with good poise and pace. It was a pleasure to host them and the officials for Viking beers after the game and this is surely what makes the Cosmo league special. To our boys we need to build on the second half performance and eradicate some of our silly mistakes that were evident during the first. We move on together!
First half
Vikings 0-4 TGA
Second Half
Vikings 3-1 TGA
Share via
FacebookTwitter
https://www.pitchero.com/clubs
Recent news

Let's get there early to support the Vets