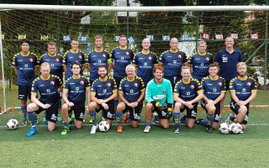 Entertaining match against the newcomers !

After an unsurprising delay to events with a kick off delayed to 1515hrs due to late arrival of opponents, it was full action from the start with both teams committing players forward. It was Inglorious who took the lead on around the 10 minute mark when Viking failed to clear the ball and a “back pass header” ended at the feet of the opponent striker who did not miss the open opportunity. Vikings looking to get back in the game were creating chances but failed to convert and instead Inglorious went up 2-0 after a well taken goal on counter attack exposing the lack of speed in the Vikings defence. Vikings are known as the comeback kings of Espzen and the last 20 minutes of 1st half was exactly that, a great shot from Mathias was only blocked by the keeper before a Leslie tap-in and only few minutes later Leslie scored his 2nd form a header after a Stabell corner.

2nd half and in despite of “Thin bench” Viking were looking for the win, but once again it would have to come from behind after we first did a copy-paste of the 0-1 goal and failed to clear and later saw Inglorious score a beautiful 2-4 goal from a direct freekick. However Vikings don’t give up and with the introduction of “202” up front and full pitch pressure it was an uneasy period for our opponents. A handball in the box gave Vikings a penalty which well converted by Locomotive and shortly after a misunderstanding handed Vikings an indirect freekick in the box, which greatly worked by Leslie and Mathias with the latter making it 4-4. Once again credit to both team for going for the win, but the entertaining affair settled at 4-4 !

Thanks to the opponents who will be a handful for most teams in the league and to the ref who had some tough call to make, but got most of them right. For Vikings great debut for Anders, while Havenissen also played a great game and deservedly got runner up for man of the match, in the end Leslie took it with two goals and an assist. Next week Vikings are facing clear league leader Aioli, and we would need to play a different type of football to get a result here !