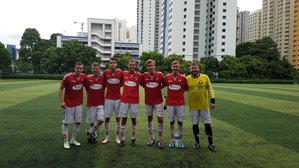 Young gun invasion against the not so Usual Suspects

A batch of fresh, young Viking trainees has conquered the seas to join the pillaging squad in Singapore!

August is almost like Christmas Eve for the Viking coaches that can´t wait to unwrap the shipment of new, fresh pillaging trainees arriving from Denmark. This years shipment is bigger than ever and based on the performance today, the coaches have reason to be excited.
With light rainy and cooling weather, the conditions were perfect for a young gun invasion of The Usual Suspects that seemed to have been out looking for new talents as well. We had a good start of the game with a lot of possession and also a few attempts to get an early lead. Yet it was the opponents that came closest in first half with a few dangerous counter attacks where our new keeper Michael was forced to show his talents. Fortunately he did well, except a few poor goal kicks - but as he said, it must be caused by the boots borrowed from coach Schønnemann...

In the start of second half we allowed the opponents to keep a bit more possession which gave our young guns the possibility to use their speed in counter attacks. This paid off after 10 minutes when Rasmus drove the ball from our own half and passed the Usual Suspect right back a couple of times (he´s probably still out at the pitch running around in circles) and finished clinically from the edge of the box. Excellent show from Rasmus who was all over the pitch today and also fully deserved MOTM. His goal was not the best of the day though - instead Moberg took that title with a left foot stunner from 25 yards that even ripped the goal net to pieces (ok, it was ripped already - but it sounds nice). The 2-0 goal with 10 minutes to go closed the game, but the young guns were still full of energy with goals from Anders and another one from Rasmus in the last minutes making the final result 4-0.

Excellent effort from the Vikings, but now we all look forward to the real test of the newcomers next weekend with a welcoming party on Saturday night as warm-up for the Sunday clash against DHL.

Thanks to TUS and the ref for a good game.