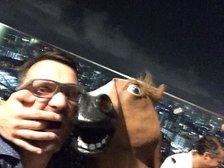 Brilliant Vikings party! The Sunday game? Well, let´s quickly forget about that one...

Let´s take the positive first: Raven surely wins the Vikings party host of the year trophee - excellent work! What a brilliant night with 50 crazy party people all worth the Sunday hangovers that also had a heavy impact on the game today.

Important match today for the Vikings if we wanted to stay in the top end of the table.

The first 20 minutes were very equal and chances were being created in both ends. Vikings was the first team to score and it happened by a good cross from John to Thiesen who played it back to Madsen who moved it back to John who finally put it in the net. The lead only lasted for 8 minutes. DHL equalized by a very good strike from the edge of the box.

From here we started to loose more and more of the possession and the aftermath of a fantastic Viking Party really started to show. The 2-1 goal was also a well played attack by DHL and after that it quickly became 3 and finally 4-1 on a penalty.

The mix of the Serangoon pitch and a Saturday Viking party once again proved not to be the recipe for Victory.

MOM was shared between John and club president Rafa.