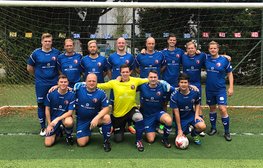 We would definitely win the league trophy, if it was only about being spoiled with new uniforms and good looks, but unfortunately we are just the boring mid-league team when it comes to the football.

In the shadows of some random boxing match in Las Vegas, the Sunday Vikings were out fighting for 3 points in Queenstown in a brand new outfit. Unfortunately neither the boxing nor the new outfit was enough inspiration today, and it ended with a deserved 1-3 loss despite a rare goal from Skov's korean crush, Boe. Well spread votes for MOM that was awarded to Stack although he has been forced to change his golden Puma King boots from Beijing to another classic, Copa Mundial.
We are now halfway through the season, and it is time to step up in September to finish off this season in better style than the previous one.
Thanks to ref and Raffles for a good game, and good luck with the rest of the season.
Share via
FacebookTwitter
https://www.pitchero.com/clubs
Recent news