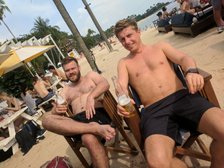 Last Sunday in Singapore for the match reporter - a big thanks to the team for the best possible farewell gift: 3 points and plenty of recovery beers!!

On a very hot Sunday, the stand-in coach Domino (who took over as his boss was late....) was spoiled with a squad of 18 quality players for the game today against unbeaten Aioli.
The quality of the team was well proven by the fact that our topscorer Stabell was excluded from the team - guess Schoene should remember shin pads for next weeks training session.
Most of the players had prepared well for the game being out till late Saturday night, celebrating a cosmo league win against the same team (and also Elbo's birthday). That's how Vikings warm up the best for a big raid, so of course the performance ended being the best of the season from our side. The outcome was a deserved 3-1 victory although Aioli also had their chances through the game. First team to beat Aioli this season - that is class and hopefully this can inspire to finish this season with the best result in the Sunday team history.
Great goals from Thiesen, Staal and Obel, and excellent play from the whole team even including the new Norwegians, but the star of the day was one of the new young guns, Parwez, who played an outstanding game on the midfield.
The victory was celebrated with plenty of recovery beers at TBC - brilliant weekend!!!
Thanks to the ref and Aoili for a good game, and good luck with the title race.
Share via
FacebookTwitter
https://www.pitchero.com/clubs
Recent news