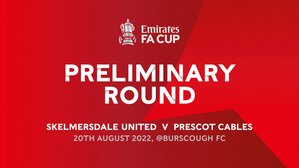 Fresh from their midweek victory at City of Liverpool in the Northern Premier League, Skelmersdale United are back in action this Saturday, 20th August, when Prescot Cables visit the Community Stadium Burscough for the FA Cup Preliminary Round tie.

In the event of the scores being level after 90 minutes the replay will take place at Prescot's Hope Street ground on Tuesday evening 23rd August 7.45 pm kick off.

SKEM UNITED LOTTO - Jackpot £500
Those heading to Burscough can also take part in the United Lotto, for just £1 you get two chances to pick 6 numbers from, this week 1-17 Get the 6 right and you could be in with a shout of the £500 Jackpoot
See Mal or Norman on the gate
All money raised from the Skem Utd lotto goes back into the club to help fund what is hoped to be a succesful Northern Premier League season.