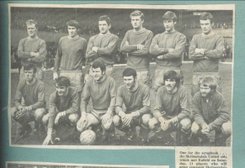 Stan joined United from Kirby Town at the start of the 1968-69 season and won numerous medals with the club, non more so than the triumpant Amateur Cup winners medal in 1971.
During the 1969-70 season, Stan was an ever present playing more than 60 games in the season

After leaving at the end of the 71-72 season Stan joined Altrincham first as a player and later as Manger, whilst on the Playing staff, Stan who made over 600 appearances for Alty, won the FA Trophy becoming the first player to win both the top non league honours.