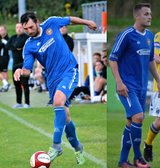 After a great 2-2 draw at home to Evo-Stik Premier side Warrington Town last night, Skelmersdale United are delighted to announce a double signing in attack in the form of Andy Owens and Nathan Randell.

Andy joins the club after being released from Evo-Stik Premier side Altrincham at the end of last season. He started out in the youth system at Liverpool before moving on to Stoke City, Leek Town and Stafford Rangers.

He was part of the Glen Hoddle Soccer School in Spain and moved to 'Alty' back in 2009 as a defender before spells at Rhyl, Accrington Stanley, Southport and Mansfield Town. A long stint at AFC Telford included winning the Conference North Title in 2013-14 in a stay until 2016 during which he spent time on loan at Stockport County and Marine.

He moved on to Stalybridge Celtic in the summer of 2016 before rejoining Altrincham last December this time as an experienced striker making 18 appearances and scoring four goals. He will bring huge experience to United and made a superb first impression in United blue on trial last night with a clever strike.

Speaking to Andy last night, he commented "I look forward to enjoying football again and after a successful trial tonight, I am excited to be part will hopefully be a successful season for the club.

Nathan Randell rejoins the club after joining on work-experience from Wigan Athletic from February to April, which saw him score twice in 14 appearances. He was released by the Latics at the end of the season after missing out on a senior contract but excelled at both scholarship and U18s level. He was a standout performer in the so-called new era last season at United due to his hard-working spirit and never say die attitude.

Speaking to Nathan last night, he commented "I am happy to be back at Skem after a great spell last season, I am excited for the new season and hope to play my part in the push for promotion."

United manager Alan Rogers expressed his delight as securing the duo, " I am delighted to sign Andy. he is the forward I have been looking for all summer.He will be a fantastic help to the young lads as well as being a major signing for us this coming season. Nathan is a young talented boy who needs a chance and will learn from Andy as well to help him progress."