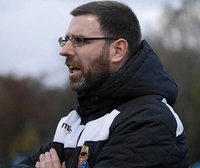 Skelmersdale United are happy to announce the appointment of Paul McNally as First Team manager.

Not to be confused with the former United player and assistant of the same name, Paul joins the club with immediate effect ahead of tomorrow's home game against Mossley and brings experience of success in similar situations to the club.

His playing career spanned the Saturday and Sunday League levels with spells at Ayone (Ex Liverpool county combination league), Poulton Vics, South Liverpool and Cammell Laird with whom he moved onto coaching. As 1st team coach/assistant manager from 2012-14 alongside ex-United coach Tony Sullivan, Paul guided the team to second spot in the Evo-Stik North Division one with promotion denied by Trafford in the play-off final.

Sadly, the club folded after the following season but the restart in the form of Cammell Laird 1907 in the NWCFL with Paul securing automatic promotion at the first attempt in 2015-16 with just three defeats across the season, he departed during the following season leaving Lairds in good shape with three cup quarter finals.

A move to Litherland REMYCA as assistant to Phil Stafford saw Remy finish third in NWCFL Div 1 with play-off defeat to City of Liverpool and with Stafford moving on to Bootle, Paul took the reins with instant success as Remy finished second with 99 points and securing promotion to the Premier Division.

Paul departed the club at the end of the season and aside from management, works at youth levels with positions at Educ8 Group and Liverpool FC International Academy. Speaking with Paul earlier today, he commented " I am joining a fantastic club with a great history & tradition. At the moment the club isn’t in the best position in the league but we will work very hard as a club to improve this, I am looking forward to it."

Club Secretary Daniel Roberts expressed his joy on Paul's appointment "On behalf of the board of directors, I am delighted to welcome Paul McNally to Skelmersdale United. Paul is an ambitious young Manager and his vision and ambitions match that of the club, Paul has been consistently successful in his managerial career to date achieving promotions in his last two assignments and we are sure that he will be very successful at Skelmersdale United too."