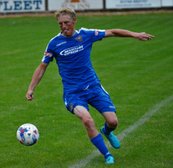 United held in FA Cup
Skem Utd failed to take their chances as they drew 1-1 with North East Counties, Penistone Church, Making 4 changes from the side that drew with Bootle in midweek, Skem didn’t have the fluency from their early season start
Resulting in a dull first half, both sides cancelled each other out and chances were few and far between, it was not all blood and thunder FA Cup tie,

How the second half changed as United came out all guns blazing
A Matty Coughlan 35 yard screamer that just went over set the tone and it was no surprise when Joe Cawley, after some good industrious work from Griffiths and Wood put United ahead on 57 minutes, beating his defender in the box before rifling across goal for 1-0.

Wood and Griffiths were combining well down the left, Griffiths forcing a corner from a well worked move between the two and Wood beating two men as he made his way into the box, forcing a near post save from Snaith in the Church goal. United pressed hard and gave the visitors very little opportunities as they looked to progress in this seasons Emirates FA Cup

It all changed with 15 minutes remaining as a long ball down the right found Howes, who skipped past his marker and delivered a telling cross met first time by substitute Munday who blasted in the roof of the net, there was little United could do

Shell shocked and with the visitors tale up, Barnes had to react quickly to smoother at the feet of Barlow and again saved as the ball came through a crowded defence

United this season are made of sterner stuff and they got back into the game putting more pressure on Snaiths goal, Cawley again went close, Molyneux had a shot deflect of a defender and loop agonizingly wide and Jordan Tyrer had a header that flew just over the bar.

But with time reaching 90 minutes Skem were awarded a free kick on the left, Griffiths drilled it in, Foy turned his marker and his shot looked goal bound only for Snaith to make a fantastic save.

But the action was not quite over as in one last foray Penistone were awarded a free kick on United’s right, floated in and headed back across goal, Brett Lovell was there to smash the ball onto the bar.
The referees whistle sounded immediately
Skem will feel a little unlucky that they didn’t get the win so justified but with the last minute drama will be well pleased for a replay