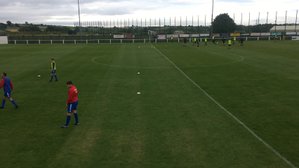 A night not soon to be forgotten for the United faithful as the Blues stormed to a 5-2 win in the FA Cup Extra Preliminary Round Replay at Penistone Church. Not since the 1938-39 season (Horwich RMI 5-4) had United hit five on the road in the FA Cup. (Thanks to Kev Panther for the amazing statistic)

The sides drew 1-1 on Friday night in torrential rain and despite the DSM Memorial Ground seeing intermittent rain, the on-pitch action certainly didn't disappoint. Paul McNally made one enforced change from Friday with the unavailable Liam Wood replaced in the starting 11 by Joel Douglas.

Both sides hit efforts past the post early on before the best chance fell to the hosts with Nathan Keightley's free kick finding the head of Brett Lovell who headed over the bar. Alex Griffiths lofted a shot over the bar at the other end after clever-link up play before Luke Aldrich and Keightley both drew blocks from good chances.

United opened the scoring in style on the half hour, a blitzing counter run from Joel Douglas saw him find Jack Grimshaw who picked out Matthew Scoullar in space to flick a cross, the Peni defence blocked the effort with the ball rolling nicely for Griffiths who rocketed the ball past French into the top corner for 1-0.

Peni could have levelled instantly as James Young's sweeping cross needed just a touch at the front post to beat Ben Barnes but evaded all comers. United doubled the lead on 37 minutes as after winning possession superbly, John Keatley advanced on goal and slotted past French into the far corner for 2-0.

The hosts responded to the second goal with a strike of their own as Tom Cadzow headed in after connecting to Danny Barlow's free-kick for 2-1. Both sides had attackss in the remainder of the half with chances at a premium as the heavens began to open into the half-time interval.

United started the second half the better with Griffiths cutting inside and curling an effort which drew a fingertip save from French and the Peni 'keeper was called on again minutes later with a superb diving stop denying a rasping shot from Paddy Hamid.

Peni responded with a dangerous cross and close range effort from Keightley who looked to be the hosts' best threat of levelling. However, United had other ideas and moved 3-1 ahead in stunning style, a rapid counter attack seeing Joe Cawley and Douglas combine with the latter picking out Matthew Scoullar who deftly glided the ball past a statuesque French into the back of the net.

Barnes was forced into a save at the other end after good pressure from the hosts before United looked to have sealed the win on 70 minutes. Hamid struck from long range and rattled the crossbar with Cawley in the right place to collect the ball and head in for 4-1,

Cawley could have had a second as he finished off a counter-attack with a powerful drive which French tipped past the post. An instant impact from substitute Joshua Illesanmi wrapped up the tie as his in-swinging corner saw James Young flick the ball over his own 'keeper and into the net for 5-1.

Penistone ended United's spree with nine minutes left of the 90 ans they did so by continuing the spectacular run of goals, Nathan Keightley driving a free-kick against the bottom of the par post with the ball cannoning over the line past Barnes for 5-2.

The final whistle in torrential rain was greeted by a roar from the travelling fans as United not only secured a first win of the season but an historic FA Cup passage that sets up a tie on the 24th away at newly promoted NPL side City of Liverpool.