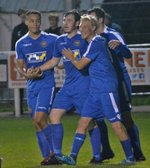 Joy of Six For United

An epic nine-goal thirller at the Scott Rees & Co Stadium on Tuesday evening saw Skelmersdale United claim a 6-3 win over Ashton Town in the Liverpool Senior Cup First Round.

Paul McNally made a few changes from the defeat to Longridge Town with John Keatley, Richard Brodie, Tom Croughan and Jack Grimshaw all included in the starting lineup.

United started the brighter with John Keatley heading narrowly over the bar from a corner before Richard Brodie drew a low save from John Courtney. However it was the hosts who opened the scoring in style on 13 minutes, Alex McMillan sliding a pinpoint through ball for Dylan Glass who advanced on goal and slotted past Ben Barnes for 1-0.

The response from United was almost instant as a through ball from Eddie Toner found Joe Cawley who cut inside and slotted past Courtney into the far corner for 1-1 on 15 minutes.

United could have completed a rapid turnaround with the goalframe saving the hosts as Brodie cannoned the ball against the post from close range. Action at both ends saw Glass have a header blocked with the resulting counter seeing Tom Croughan square for Peter Moore who forced a save from Courtney.

Chances continued with Moore and Jack Grimshaw seeing efforts saved by Courtney while a long drive from ex-Skem winger Jesse Dowling saw Barnes saving low. United took the lead on 39 minutes with a Moore free-kick causing a defensive melee that saw Croughan benefit and fire past Courtney for 2-1.

Ashton were soon in deep trouble as Skem added two further goals before half-time. Brodie slotting in a free-kick for 3-1 before a pacy win run and cross from Matthew Coughlan saw Moore connect to head past Courtney for 4-1 into the interval.

United began the second half the same way they ended the first, with Moore extending the lead to 5-1 on 50 minutes as he slotted past Courtney after collecting Cawley's flick on from a Toner through pass.

The lead could have been extended on 63 minutes as having broken through the Ashton defence, Cawley looped an effort which saw a superb take from Courtney on the line before he saved low from Moore after a clever combination with Croughan.

Both Moore and Glass looked to add to their tallies with Courtney and Barnes both making good saves from their efforts. Ashton cut the deficit on 83 minutes as ex-United defender Jack McConville connected to a McMillan pass to tap past Barnes for 5-2 on 83 minutes.

Ashton's joy was short lived though as United struck a sixth, substitute Joel Douglas' mazy run allowing him to feed Moore who slotted past Courtney from an angle to complete his hat-trick for 6-2 on 85 minutes. The hosts responded with Glass heading narrowly past the near post before they made it 6-3 on 89 minutes as substitute Daniel Taylor collected a pass from Glass and advanced on goal before slotting past Barnes.

The final whistle minutes later was greeted with joy by the travelling contingent as United set up a visit to St Helens Town in the next round after overcoming a tough Ashton side who will surely challenge for the title in Division One North.