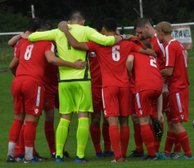 On the back of a high-scoring Liverpool Senior Cup win in midweek, United returned to league duties with a narrow 1-0 loss to high-flying 1874 Northwich at Townfield.

A few changes from midweek saw Jordan Tyrer promoted from the bench while there was the chance for first outings of the season for Peter Doran and Tom Grimshaw with Bafude Djabi also coming into the squad.

The hosts started the brighter with a clever wing run from Lee Knight seeing him sweep over a dangerous cross which to United's relief, didn't find a connection but they went closer minutes later as both Nathan Okome and Knight combined to force a point-blank stop from Ben Barnes.

A teasing cross from Jake Parker saw Okome head past the post while at the other end, Jack Grimshaw drew a low save from Tony Aghayere from an acute angle. United could have opened the scoring after Cawley collected a through pass from Matthew Coughlan and hit across goal but while his effort beat the post it also beat the on-running Richard Brodie who would have had a tap in at the far post.

Tom Croughan swept an aerial pass towards goal which saw Brodie flick on at the far post but over the targe and 1874 went even closer as a Matt Woolley free-kick cannoned back off the bar. The opening goal came on the half hour mark as Matty Russell pounced on a Croughan back-pass and after evading Barnes sqaured for Parker to fire into the empty net for 1-0.

United responded with a cross-field shot over the bar from Croughan before a superb cross from Taylor Kennerley saw Mark Jones unfortunate not to double the hosts' lead just before the interval.

The first chance of the second half saw John Keatley firing over the target from a rebound before a stunning save from Barnes saw him tip a powerful shot from Knight over the bar. A few close calls for the hosts almost saw United draw level but the also came close to conceding a second as a teasing cross saw the ball evade both Knight and substitute Michael Koral who would have had an easy tap in if connecting,

A blow for United came on 79 minutes as an off the ball collision with a home defender saw Joe Cawley shown a straight red card and the hosts looked to take advantage with Barnes saving low from Koral and Parker's angled efforts. United did have a good chance to level late on as Croughan crossed for Brodie but he could only tap past the post.

The final whistle was greeted joyously by the hosts but meant United ended the month with a loss ahead of a packed October that could include the return home.