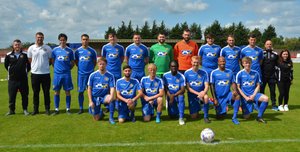 Ahead of a bumper Bank Holiday weekend, Skelmersdale United claimed their first league win of the season with a 3-0 win at Litherland REMYCA.

Paul McNally handed a second debut to Richard Brodie (dual-reg from Ramsbottom United) while Liam Wood and Charlie Kelly were promoted from the bench. United started on the attack with Joe Cawley's mazy run towards goal seeing him fire over the target in the opening minutes.

Neil Monaghan hit wide of the target minutes later before an angled cross and shot from range saw the hosts threaten further. Liam Diggle sent a dangerous low shot past the United goal after gaining possession ahead of United opening the scoring on 21 minutes, Richard Brodie advancing on goal and slotting past Ben Morrow into the bottom corner for 1-0.

The lead could have been on 26 minutes after Brodie won possession and advanced on goal before hitting low at Morrow while at the other end , Monaghan swept a free-kick over the bar from close range before Colin Quirk drew a standing save from Ben Barnes ahead of the half-time interval.

The second half saw the first chance going to the hosts with Quirk's angled free-kick seeing Barnes collect in the air before Untied doubled their lead on 56 minutes in spectacular style. Charlie Kelly striking a free-kick from long range which sailed past Morrow for 2-0.

United looked to have sealed a first league win of the season just after the hour mark as Liam Wood let fly from distance and beat Morrow superbly for 3-0. United suffered a blow just two minutes later as Brodie was shown a straight red card for an apparent 'stamp'.

REMYCA's response saw Ashton Clements forcing Barnes to tip over the bar before a stunning diving save from Morrow saw him deny Cawley from close range. The hosts continued to threaten with two clever flick-ons at the far post before Declan Gregson's cross found the head of substitute Peter Silcock who forced a superb point-blank save from Barnes with a diving header.

The last chance of the evening saw United substitute Christian Soda drawing a low stop from Morrow after clever play and with the final whistle sounding minutes later, United secured their first league win of the season and second on the road in three games.