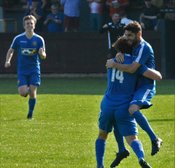 After a heartbreaking exit from the FA Cup at City of Liverpool on Saturday, United returned to NWCFL duties with a five-goal thriller as they lost out 3-2 at home to Whitchurch Alport.

Paul McNally restored Matthew Coughlan and Richard Brodie to the line-up while Anthony Cato was in line for his first action of the season on the bench. Both sides had played away in the FA Cup on Saturday so a quiet first quarter wasn't a big surprise. The visitors were gifted a chance to go ahead on 27 minutes, Jud Ellis felled by United captain Jordan Tyrer after advancing into the area. Alport captain Darren Campion stepped up from the spot as saw his initial effort and the subsequent rebound strongly parried by Ben Barnes who made it three saves in succession as he tipped the resulting cross past the post.

The visitors continued to threaten with Dylan Bathe cutting inside and sweeping an effort of the bar before substitute Arron Johns drew a fingertip save from Barnes. United's reply saw Matt Coughlan looking to repeat his FA Cup heroics with a strong free-kick which stung the palms of David Parton in the Alport goal. The sides went into the interval on level terms but that soon changed within five minutes of the restart, Nicholas Porter defying a tackle to pic out Ellis who looped the ball over Barnes into the net for 1-0. The lead could have quickly doubled had Johns been a little closer with his effort which went past the post.

United levelled on 56 minutes as a long throw from Richard Brodie saw Tom Croughan collect in great space and slot into the corner past Parton to equalise at 1-1. However, the equality was to last just past the hour mark as Ellis struck his second goal of the afternoon, he created space on the left side and slotted from distance past the diving Barnes for 2-1. The lead proved to be a signal call for United to attack more and they tested the Alport defence a number of times before striking lucky on 83 minutes.

A clever run down the left from Liam Wood saw him send over a dangerous cross which after a flick on by an Alport defender saw the ball fall to substitute Anthony Cato who rifled the ball into the far corner for 2-2.United's joy was to be soured minutes later though as an error from Brodie saw Ellis collect the ball and advance on goal before slotting past Barnes for 3-2, completing his hat-trick in the process.

The goal itself was a blow but a second one came after the strike as Marvin Molyneux's comments to the referee saw him become the first sin-binned player for the club. United could have levelled for a third time deep into added time as Joe Cawley's flicked effort was deflected out for a corner. Sadly, not to be for United as the final whistle sounded but having played three times in a week, one win and two narrow losses to tough opposition can be seen as progerss.