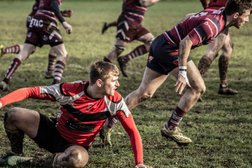 Skipton came away with just a losing bonus point from a hard fought and closely contested encounter with Aireborough at the Nunroyd Pavilion Fields.

A strong start by the visitors lead to a penalty for an Aireborough off-side, which centre Joe Gill (JBL Gill & Sons Haulage) slotted for an early lead. A knock-on by Skipton from the re-start gave Aireborough the scrum and, playing down the slope, they used their quirky pitch to put the ball into the dip in the bottom corner. A straightforward drive from the line-out put the home side over for their first try, with the extra points added from a touch line conversion.

From a Skipton foot up at the next scrum, Aireborough again put the ball into the bottom corner. Full back George Smithson (Metcalfe's Driver Training) collected and took the ball down field. An off-side gave the home side another chance at goal but the kick drifted wide. Aireborough used the slope again, pinning Skipton down in the bottom corner and were in for a well worked second try after many phases of play. A touch line conversion attempt again added the extra points.

Despite an excellent return by Smithson from the re-start and a great break by Kiwi prop Tyrin Wyllie, Aireborough gained a penalty for Skipton not rolling away, which they tapped and ran in converted try number three. Skipton back-row Harry McEneaney (Ryan Binner Plumbing and Heating) had to leave the field with an injured wrist, being replaced in the pack by Ryan Chafer. A knock-on from the re-start gave Skipton the put in and scrum-half Sam Brearley fed skipper Hamish Munro (RN Wooler) at stand-off who was over for the visitors' opening try. Gill added the extra points.

A penalty to Skipton from the re-start set up a platform to attack and Munro was soon over for try number two. Gill added the extra points and the sides turned around at 21-17 in Aireborough's favour.

Skipton were caught off-side early in the second half giving the home side an easy chance to stretch their lead. The visitors worked their way down field from the re-start and gained a scrum five metres out. They were held up on Aireborough's line but the home side conceded a penalty. Skipton opted for the scrum and spun the ball down the back line, putting Gill over for try number three. The conversion attempt drifted wide but Skipton were trailing by just two points at 24-22.

Skipton gained a penalty from the re-start for Aireborough not releasing and put the ball into touch but the throw-in at the line was adjudged not straight. The home side opted for the scrum. Skipton conceded a penalty in the resultant move and Aireborough again opted for the scrum. A quick chip through put their winger in for the home side's fourth try. The conversion attempt drifted wide.

Skipton Coach Craig Bartlett (Pure Travel/WBW) brought Darren Greenwood into the pack and McEneaney returned to the field, replacing Chris Wright (SHC) and Mal Willsher (A&G Plastics). The visitors took the game to Aireborough right up to the final whistle, with great tackling by Wyllie and excellent rucking by Greenwood, driving his man off the ball.

Munro put a late penalty into the corner for Skipton but time had run out and Aireborough gained a 29-22 victory.