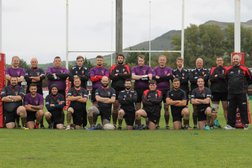 Close but no cigar

A depleted second team travelled to Halifax with 14 men prepared to take the field. Vandals being great hosts offered to make up the numbers and lent "Dave" to the men in red, making him Skipton's third debutant behind Will Beech and Danny Windle.

A shaky start in defence saw Vandals cross twice in the opening exchanges, one of which converted. However, the shiny headed trio at 9, 10 and 12 settled the situation calming things down in defence and creating solid scoring opportunities.

First to cross was Dave against his own side after some slick handling down the blind side from Jonny Gane and Andy Maclean (Thisledo Holiday Cottage). Then Windle went over under the posts following nice exchange of passes with returning skipper Shaw (Witch Electrical). James Ackers was next on the score sheet chasing down a deep kick and beating the odds to get the touchdown. Further scores from great individual efforts from Will Beech and Jordan "Sid" Wilson (WBW) saw the sides turn around with a Skipton advantage and league bonus point. Darren Greenwood converted 4/5 including one from the touchline.

The hosts came back strongly in the second half and Skipton struggled with injury and ill-discipline at one point playing with 13 men due to blood bin and a call for Sid to go join the first team. Although Skipton defended valiantly, the hosts took control and going into the final minutes regained the lead having scored 3 tries without answer. A couple of penalty kicks made for a nervy final minute as Skipton were in front 32-31 but a mixture of further poor discipline and dubious decisions from the official saw Halifax progress from deep in their 22 into goal kicking territory right in front of the posts and the full back neatly converted to break Skipton hearts with the final kick of the game.

Lots of ifs and buts were discussed. For example twice Skipton were so close to further tries but held up over the line. What needs to be remembered is 14 men turned up and did the club proud despite not getting the W.