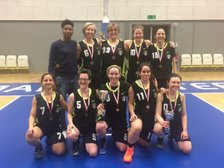 This was to be the battle of the titans! Having not won either of their two league matches thus far against Lapwings, naturally Lynx 1 knew this would not be an easy game.

The team started 7 – 0 up but throughout the game this fluctuated frequently and Lynx 1 were behind by the end of the first quarter. But did anyone give up? Absolutely not!

By the second half, the team were behind by 11 points, as Team Captain; Sam said “Everyone literally gave it their all. We performed like a real team and worked together like a real team should do. No one let their head down and we all helped and believed in each other.” Coach Kay agreed stating her pride in the team “We played as a team from start to finish and didn't let our heads drop or give up for one second. So proud of every one of you, I knew we could win.... And we just proved it!”

The team pulled the scores up to even out and within the last few minutes of the game, excelled their efforts even further to bring home a final score of 67 – 63 to Lynx .

We are bursting with pride for our first team and as all members have said “BRING ON THE PLAYOFFS!”