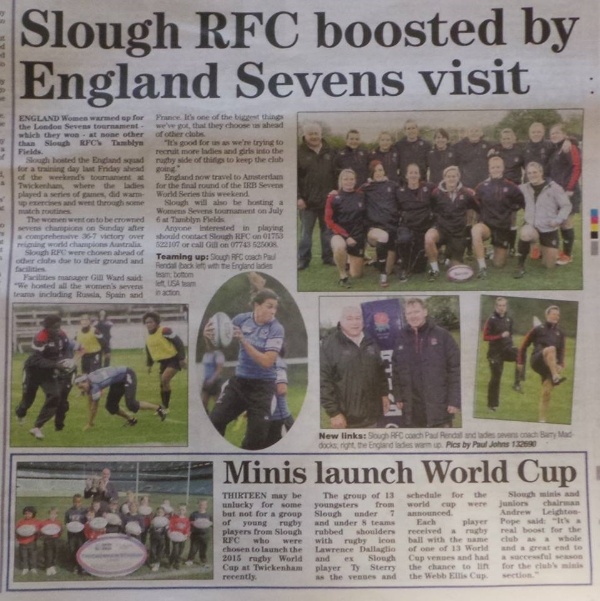 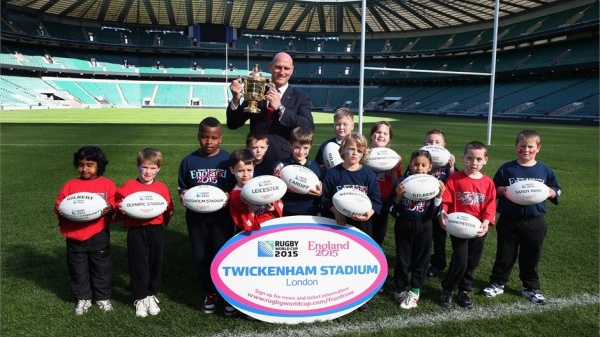 Dallaglio spoke to the young Slough players about their rugby and showed them the Webb Ellis Cup.

The youngsters then swapped their Slough shirts for special RWC t-shirts which they wore during the announcement. They were also given rugby balls, each one with the name of one of the thirteen world cup venues on before being photographed and filmed with Dallaglio and the Webb Ellis Cup by the world’s press.

Slough minis and juniors chairman, Andrew Leighton- Pope, said it was fantastic that Slough RFC minis section had been picked to launch the 2015 world cup. “It’s a real boost for the club as a whole and a great end to a successful season for the club’s minis section" he added.

U7s coach Matt Harris said the children and their parents had a fantastic morning and were very grateful to have this opportunity.

Twickenham, often called the home of rugby union, will host 10 of the RWC games including the opening match and the final.

Fitting End to a Successful Season for Slough U16s 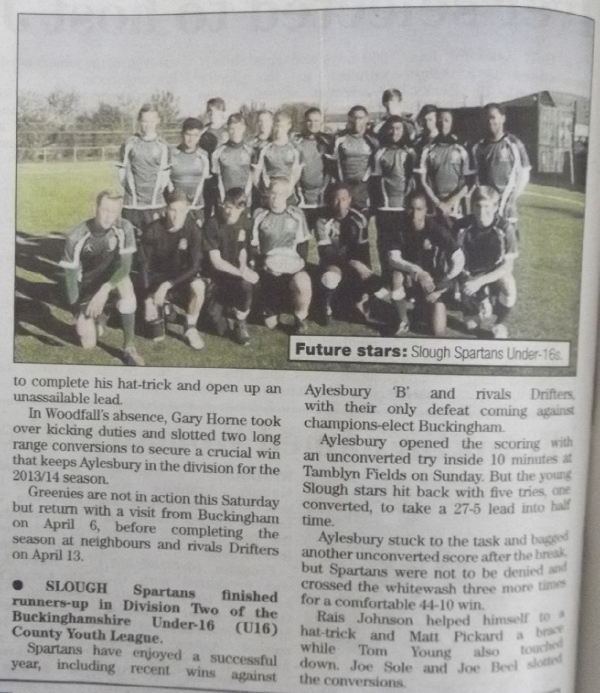 850 boys and girls attended the Slough RFC Annual Minis Tournament on Sunday, this year renamed The Wynford Phillips Memorial Mini Tournament in tribute to the club’s longest serving member who died in January.

Slough Lions, one of Slough’s two U7s teams, was the most successful team for the club at the tournament, working their way to the finals after playing teams from Hillingdon, Phoenix, Old Albanians and Drifters in their pool.

An immediate try for George Harris( captain) in the Lions opening match against Hillingdon Abbots set the tone for the rest of this game as Slough took charge running in 10 tries to Abbots’ 6 with scores from George Harris(4), Cody Rumney(4) and Alfi Harris.

An evenly matched and fast paced game against local rivals Phoenix followed with the two teams matching each other try for try until a touchdown for Henry Caldwell in the final moments of the game put Slough ahead by one point.

And a dropped ball moments before the final whistle in the Lions third game led to Jamail Alikhan raising Slough’s tally to 11 against Old Albanians 10, adding to tries from Rumney, Harris and Caldwell for another very tight win.

From the start Beaconsfield showed themselves to be the stronger team taking two tries within minutes. Slough replied with scores from George Harris and Cody Rumney but went into half time 5-3 down. The second half saw a spirited effort from Slough but a powerful Beaconsfield controlled the game, beating Slough 10-6 and winning the festival’s U7s section.

In other age groups, Slough U8s played four games against Thatcham, Chesham, Drifters and Egham, winning two and losing two and finishing 5th out of the 10 teams in their age group. Coach James Stevenson said he was pleased with how the team had played against some tough opposition; they had all had a great day and worked together as a team.

A strong Slough U9s team won two of their three games with Harry Williment, Robbie Brown and Harry Dillon all on the scoresheet in a 30-15 win over Egham in their first game.

And a well played first half saw the Slough U9s team go into half time 20-10 up against Drifters in their second game before a determined Drifters team took control of the game and ran in 20 unanswered points. Alfie Spiller pulled one back for the Slough team and was set for another when the whistle blew with the try line less than 5 metres away ending this game a very narrow and painful 30-25 defeat for the young greenies.

In their last game of the day, Harry Dillon, Haatieb Jaldin and Zuriel Elum-Smith contributed to a satisfying 35-10 win over a combined Reading/ Thatcham team, finishing the day 4th out of the 8 teams in the U9s category.

Slough U12s had mixed results with a win, a loss and a draw. A very physical opening game against Pinner saw Slough down 5-0 at half time but a touchdown from Dan Harris in the second half finished this game a 5-5 draw.

Thatcham proved the stronger team in the second game winning 5-0, while in the final game a first try for new player Zac Bouaca put the finishing touch on a 30-0 Slough victory over Ruislip. (additional- other tries scored by Megan Tilby(2), Dan Harris(2), Aran Sharma.)

Minis and Juniors Chairman Andrew Leighton-Pope said ‘ Yesterday’s Wynford Phillips Memorial Mini Tournament was a huge success. The SRFC team of volunteers and coaches did a wonderful job on a very busy day logistically at the club. Keith,Wyn’s son, was there all day and was completely overwhelmed by the day and incredibly proud of his father.’

Winners and first runners up-

Success for our Girls!

Becki and Katie from our girls section, Slough RFC Parakeets, were both nominated to attend the Girls South West Divisional Trials on the 3rd February where the best players from the SW of England compete for a place in the U15s and U18s squad.

And Sandie Belcher was very pleased to inform us today that both girls were successful in the trials with Becki gaining a place in the U18s squad and Katie in the U15s!

The divisional programme is a combination of high level training, matches and camps and is a great opportunity for girls to take their rugby even further- with the next stage being national!

We don’t hear or see much of our girls section at the club so you might be interested to know that both girls started on their rugby paths right here in the minis section at Slough RFC.

Becki started as a 5 year old at the club and is now in her 2nd year of the AASE( Advanced Apprenticeship in Sporting Excellence) programme at Hartpury College, while Katie started in the U11s and captained the team in the U12s before she moved into the girls section last season.

This is excellent news for Slough RFC as it shows what good foundations we lay here in the minis section and that we can provide a pathway for girls as well as boys to take their rugby forward.

So, congratulations and well done to both Becki and Katie! You are both doing so well and are really doing us all proud!

The Mini-est of the Minis- New U6s Age Group 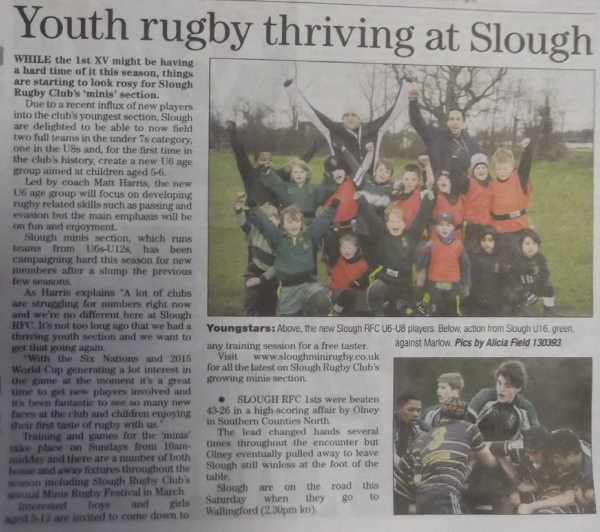 Sad news that Wyn Phillips passed away this morning.

Wyn was the longest serving member at Slough RFC and a great supporter of the minis and junior sections of the club- some of you will remember him from our awards ceremony last year.

A legend at Slough RFC and an inspiration to all who met him. He will be sorely missed.

A minutes silence will be observed on Sunday

Spartans Get Through to Bucks Cup Semis!

Massive well done to our U16s who beat Beaconsfield today to go through to the Bucks Cup semi finals! Go Spartans!

London Wasps community coaches helped the U7&8s to work on their core tag rugby skills of passing and evasion while Slough U9&10s took advantage of the London Wasps coaches expertise to get some tips on how to further improve their contact skills including rucking and mauling.

The children were all given a certificate of achievement and a London Wasps beanie hat at the end of the two hour session.

Meanwhile Slough U12s attended the London Wasps Land Rover Tournament at Farnham Royal RUFC where they came third in their pool after facing strong teams from Wheatingdon, Marlow and Amersham and Chiltern.

As part of their London Wasps experience, Slough RFC minis section also received tickets to watch London Wasps play Worcester that afternoon with the U7&8s invited to play in a display match against Chinnor and Eastleigh at half time.

Slough fielded three U7s teams and one U8s team in the half time display, winning two of their games and drawing two.

U7s coach Matt Harris said that it had been a great day for Slough RFC youth section, the children had received some superb coaching and really enjoyed themselves. 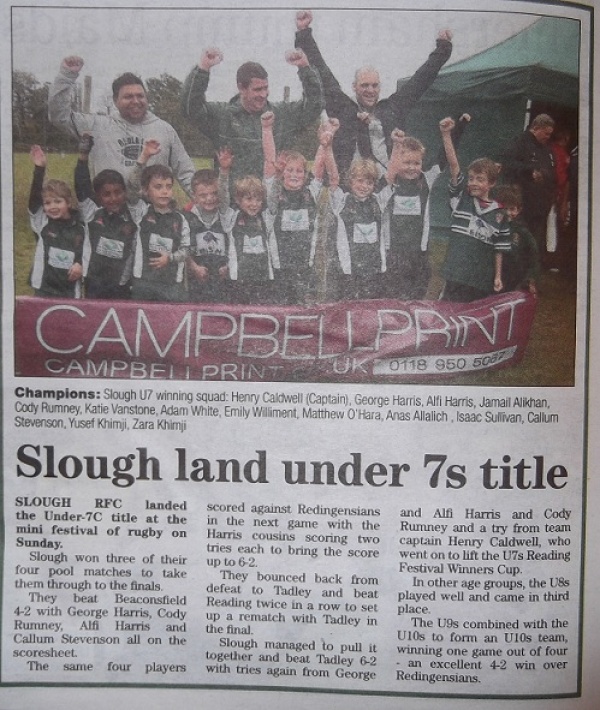 The Olympics may be over but the Olympic torch continues to inspire as youngsters at Slough Rugby Club found out when they welcomed the torch after training on Sunday.

Members of the club’s minis and juniors section were able to hold the torch and have their photo taken.

Ben Harris, whose son and nephew both play for the club's U7s & 8s tag rugby team, brought it to the club. His uncle, Dick Wilkinson, had been selected to run with the Olympic torch for his dedication to rowing and disabled rowing. He loaned the torch to Ben to take into local schools and clubs to further inspire children and raise funds for local sports clubs.

Many of the boys and girls at Slough Rugby Club had missed seeing the torch when the relay passed through Slough on 10th July so this was a fantastic opportunity for them to not only see it but to hold a piece of history in their hands. It was a real inspiration to all.

Andrew Leighton-Pope, Chairman of the club’s minis and juniors section, said 'It was a fantastic day at SRFC on Sunday as we were privileged to be able to view the torch and have an opportunity for players and family to have their picture taken with the torch. I would like to thank the Harris family for making this unique opportunity happen.’