But eventually it was the torrential rain which won the day, forcing the event to be abandoned.

Amid the quagmire a combined Slough & Phoenix U11s squad had mixed results, winning, drawing and losing before the day was brought to an abrupt end.

Slough/ Phoenix U11s had a thrilling win against Chesham in their opening match with newest member of the squad, Arjun Sandhra, scoring his first try of the season and Taylor Churchill making it 10-0 by half time.

Chesham fought back levelling the score until Sandhra scored again as the whistle blew to earn Slough victory.

Bracknell were to prove much stronger opponents beating Slough 50-0.

By the time they met their third opponents, Pinner, the weather had taken a sharp turn for the worse. The teams were cold and wet and the pitch was almost unplayable. A tough game in extremely challenging conditions ending in a 5-5 draw with Luke Embleton scoring for Slough.

Games were abandoned at this point with Windsor and Bracknell through to the final but unable to play due to increasingly poor conditions.

In other age groups, Slough U10s drew against Thatcham and lost against Drifters while in the U12s Chesham and Pinner were declared joint winners.

Slough U7s and U8s tag teams had a variety of results but overall did well. 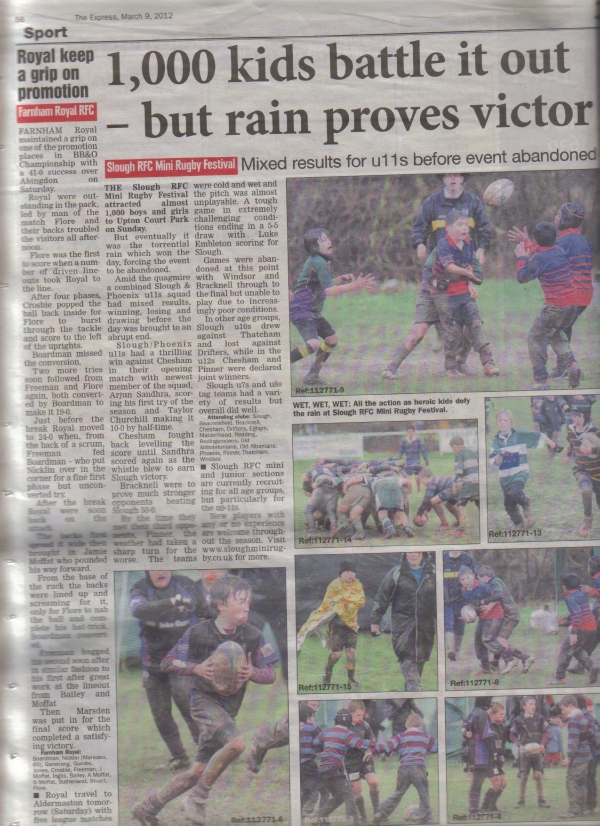