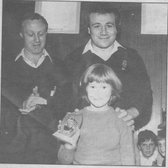 A number of past and present members will have read or heard in recent days that Paul "Judge" Rendall has been diagnosed with Motor Neurone Disease (MND). Paul reached out to close friends and family a couple of weeks ago with the news but it wasn't for broadcast, however it got posted on twitter and has now become public knowledge. Judge has been in touch and advised he's fine with the news being made public. However he is suffering shortness of breath and with tests still to be made is staying indoors so as not to risk secondary infection. In true Judge spirit he says Sue is keeping him warm and ensuring a decent supply of gin and red wine!

The club committee has been in contact with Bracknell RFC (where Judge coached) and former Wasps & England teammates of Judge to discuss fund raising events and whilst Bracknell RFC has announced a fund raising dinner on 3rd March the current preference at Slough is to arrange a fund raising game by the end of the season by which time Judgy hopefully might be able to make an appearance. Whatever the club decides it will be with the agreement of the family.

Although answering a few messages Judge is currently not up to long conversations or visits and appreciates all the support he's been getting but simply cant socialise. Obviously the club is in contact and we'll endeavour to keep everyone updated as things progress. Sure you join me in wishing Paul, Sue, Danny and Kim all the very best wishes with the fight against MND.
As a piece of Judge and club nostalgia and a reminder of happier times I've found this pic the club's only two full internationals, with Judge presenting Ann O'Flynn with a player of the year trophy with Noddy Fuller watching on