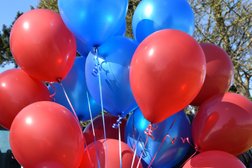 Kent Vase Final Match Report
A new golden era for Snowdown Colliery Rfc was re-born when the mighty rednblues lifted silverware on top of back to back promotions to earn their rightful place in Kent 1 next season after over 20 years in the wilderness. All this from a small club in a small catchment area is a remarkable achievement that exceeded everybody's expectations. The boys played with fire in their bellies which sets them apart from other teams.
Back to the game: Snowdown started with quick tempo from the kick off but despite continued pressure in the Beccehamians 22 could only settle for a Gareth Bramwell penalty. However, the try eventually came from some good work down the right wing by Jordan Ambrose, ably assisted by his dad, Carl John Ambrose , who offloaded for Young Tommy Johnstone to crash over. Another Bramwell penalty extended the lead to 11-0. Before the end of the first half, Ambrose Snr. was yellow carded for deliberate obstruction and Beccs scored to reduce the deficit to 11-5. In the second half changes were made, Cary Jackson, who was outstanding at flanker, was moved to fly half to make way for Linford House and Kim Frost was moved to scrum half. Another yellow was given to Sam Frost for a high tackle and Ambrose received a second yellow which reduced to side to 13 players at one point but Snowdown played some of their best rugby with a try from Jamie Claringbold, a brilliant solo effort from Kim Frost with a kick and catch and a great team try, stretching the Beccs defence from left to right ending with a touchdown in the corner by Harry Murley. A conversion and another penalty made the final score 31-5.
The heroes of the day were Johnstone, Paul Frost, C. Ambrose, Patrick Broadhurst capt. Claringbold, Jackson, Leighton Docherty, Murley, Steve Richards, K. Frost, S. Frost, Billy Plews, J. Ambrose, Nick Ford, Bramwell, Richard Blackburn, House, Steve Roberts, Kyle Carruthers