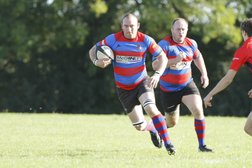 They call him the propstepper

Saturday games saw the Snowdown Coillery Cowboys play host to Aylesford Bulls 2's, a team known throughout the years not to be taken lightly and today wasn't to be an exception to that.

This was also the first home league game of the season, a season in which is very much a re-structuring one after a disappointing couple of seasons. But keen to put right some wrongs in recent years and of the back of a spectacle of a friendly match against Maidstone (29-29 draw) the cowboys, come out of the changing having had jeered themselves up with a bit of Whitney and Tina raring to go!!!

New season has also seen a new Captain step up to the mark, in the form of none other than bad boy turned not so bad boy Kim Frost. Kim's passion for Snowdown is second to none and in a brief interview on his new appointment was quoted in saying "What's happened to Stacey how come we're having to get our own water!"

With the playing conditions so perfect some of the many Snowdown VP Legend thought 'yeah I reckon I could still give 40mins to the cause' - even though they didn't say it out loud, you could see it on their faces!!

The game kicked off and Snowdown we're eager to get on with the task at hand. Knowing they had some fresh meat in the backs but a strong "weathered" front 8 the game plan was always to keep it tight upfront. Although the bulls we no walkovers the Snowdown pack showed dominance in the line and around the park, with Salmon like Saggy not only winning his own line outs but stealing a couple of the opposition.

Snowdown's hooker Stephen Roberts felt sorry for the Bulls as they didn't have their very own Saggy in the line, so much so he decided to throw a couple of line outs straight to the opposition 10 - just to even things up a bit!

By mid point in the first half the Snowdown pack we're a joy to watch moving in pods of 3's and 4's feeding off each other hitting it up the middle which created space for the pretty boys outside to have a go - They did indeed have a go and dropped it on each occasion!!

(at this point of the report I'm just going to mention that as I am myself a Man - by that I mean a forward, the backs, unless they do something spectacular will not be getting a lot of air time)

Jamie Nozza Clarinbold has found a new lease of life the season it seems, taking to the number 8 shirt like Londoner to the new builds - couldn't wait to snap it up! he had 27 tries playing second row - lets see what he can do at 8 - watch this space!

Hat trick hero Bennett really did show his full range of abilities on the day in attack and defence, when it comes to raw ability this lad is the epitome of the saying "all the gear, no idea" - BUT is this the Kyle of old has he turned over a new leaf? Some say so, lets hope they are right - others say he's too fat and unfit to get involved in the indiscipline's which effected him in the past - lets hope they're right to because which ever it is - it working - he had a great game!

Linford was putting his massive head about the place as per usual - the engine on that lad just does not run out....ever - Must be his genes.

The cohesion throughout the pack was joyous to watch and to be a part of.

The lads wearing the world famous red and blue hoops, trying their best to do the shirt proud with the past heroes of yesteryear, who we're cheering them on with age old phrases like "Go On!" and "Come on Snowdown!" Where could it go wrong!

From picking the ball up deep in his own half Snowdown's tight head prop Patrick "Propstepper" Broadhurst started to eat the meters up.... over the 22.... over the 10..... over the half way.... the defence breathing down on him.... he decided to stop let them past so they could have another go ….. one side step then another.... then whilst being tackled by at least 9 of the bulls defenders he slips it out the back of the hand to the on running Bramwell who sets it up another phase, before being involved in the following phase which sets up Warley for his 5m walk over try.

Snowdown were 35-14 up with 15mins to go and it ended up at 35-28, which shows something about the oppositions resilience. This was a nail biting encounter which was a game played with great spirit by both teams and if this is a sign of the season ahead - buy your tickets now before they sell out.

For me Gareth Bramwell's performance at 10 was worthy of Man of any match - I did say I don't like to mention the girls (backs) in my report unless they did something special - well this lad is getting a mention as he was outstanding all game.

Also I have got to mention the new blood being welcomed into the team with open arms :
Liam (10minute winehouse legend) Davis
Jake (Gav's son) Turner
Luke (hench) Burr