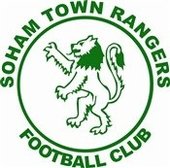 Thurrock strengthened their play-off position with a 2-0 win over Soham at the Lane.

This was the Green’s second consecutive game against a side challenging for the play-offs and made one change from the side which beat Wroxham on Easter Monday as Martin Bromwich returned from injury in place of Marcus Hall.

The opening stages of the game were uneventful in terms of attacks as Goode fired a low effort at Greygoose. In the 18th minute, Simpson ran onto a forward ball, only to be denied by Madden, with the keeper getting the faintest of touches to push the angled ball behind for a corner. Moments later up the other end of the field, the hosts could only part clear a freekick to Goode, who’s shot from the edge of the area beat Greygoose, only to come off the woodwork. Fleet slowly started to get on top and nine minutes before the break were awarded a penalty when the referee deemed Ruddy had tripped Wall inside the area as the striker tried to collect Stimson’s ball, with Aaron Water sending Greygoose the wrong way from the spot. The visitors had one less opportunity towards the end of the half with Stimson placing wide from Wall’s knock down.

Thurrock started the second half on the attack as Spence volleyed an early effort wide, whilst Greygoose made a double save to keep out Thompson’s angled ball then Wall’s follow up. Simpson then placed at Madden from just inside the area before Greygoose made another save to thwart Wall. Thurrock doubled their advantage, securing the victory, just before the hour mark when Lewwis Spence received Thompson’s ball over the defence, working his way into the area and place an angled shot wide of Greygoose. Soham went on the attack with Callum Russell delivering a long throw into the visitor’s area where twice blocks were blocked, with Soham appealing for a penalty when it appeared Waters had blocked with his hand, but these were waived away by the officials. Five minutes later, Sharman rose to meet Charlie Russell’s corner, with Madden pulled off a fine diving save to deny the midfielder. Both sides made changes as Fleet continued to push forward with Christou putting wide from a corner, while Wall had three late efforts to add to the score line, only to be denied by Greygoose, before twice putting behind.