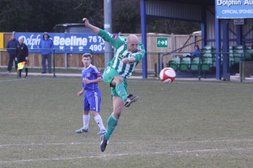 Soham moved back to within three points of the play-offs with a 3-0 victory away to Wroxham.

Both sides were playing their second games in three days, coming into the fixture on the back on weekend victories, with Soham sticking with the same side that had defeated Needham Market 3-2 at home.
This was the third meeting of the season between the two former Eastern Counties League champions with Wroxham winning at home on penalties in the League cup, before drawing 3-3 at the Lane on Boxing Day courtesy of an injury time penalty.

Soham made a bright start to the game creating a few early attacks before taking the lead after nine minutes when Robbie Mason ran onto Andrews’ long pass from the half way line to slot past the advancing Jessup. As the game progressed, Wroxham, who had to make an early substitution with Paul Cook replacing the injured Jamie Forshaw, started seeing a bit more of the play, but neither side really threatened as Stanley headed Mason’s cross over the bar and Bircham made a low save to keep out Harrop. The Greens doubled their advantage just after the half hour, when Harradine delivered a good ball to the edge of the area for Mason to lob Jessup for his thirtieth goal of the season. McCabe then headed over from a Harradine corner, before Mason was twice denied his hat-trick, firstly firing just over after making a run towards the area, before seeing a goal bound shot blocked deep into injury time.

The Yachtsmen had the better of the play in the early stages of the second half, but really failed to test Bircham. Five minutes after the break, Gent deflected Cook’s strike over his own bar, whilst Speller and Harrop had half chances. During this period both sides made changes with Lewis McDonald and Aaron Sanders coming on for James McCabe and Ross Durrant. With quarter of an hour to go, Simpson won a challenge on the edge of the area, with McDonald picking up the loose ball, taking it into the box only to see his shot turned behind by Jessup. From the resultant corner, the visitors made sure of the victory when McDonald headed Harradine’s ball back into the middle of the area, allowing Neil Andrews to fire high into the roof of the net. Moments later Scott Davis came on for the goal scorer, with Soham seeing out the final ten minutes to record another important three points and a clean sheet.