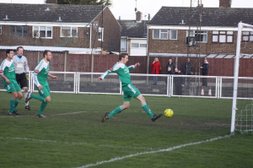 Soham’s promotion bid was dealt a blow as they lost 2-0 away to Tilbury, whilst also finishing the game with ten men.

Following overnight rain, the Chadfield’s pitch required two pitch inspections before the match referee allowed the game to proceed.
The Greens made two changes from the side that had beaten Burnham Ramblers with an injury time goal the previous weekend, with Captain Michael Simpson returning in place of the injured Chris Lindsay, whilst there was a debut for recent signing Antonio Murray.
Soham won the reverse fixture 3-0 at the beginning of December, but required two Luke Stanley goals to be certain of the result.

Other than a sixteenth minute goal, there was little between the two sides in the opening half, with both having their share of attacking play with Tweddell and Gent having early chances. Tilbury then opened the scoring when Wixon delivered a cross-field ball to Ryan Blackman down the right who fired a low angled shot across Ordonez into the far post. Soham thought they had levelled three minutes later; Stanley made a good run down the right to deliver the ball into the area where Murray lifted it over Marrable with Stanley continuing his run to score, only to be denied by the linesman’s flag. As the half continued, Wixon and Cutler both had shots, before Stanley had a diving header deflected wide in stoppage time.

The Dockers came out the better side after the interval with Cutler and Tweddell both having early opportunities, before Ordonez made a fine full stretched diving save on the hour to keep out Obersteller’s strike from the edge of the area. Soham were reduced to ten men in the 65th minute with Jordan Gent reacting to Blackman’s heavy challenge with the Green’s defender receiving a straight red. Both sides then made a series of changes before Sharman, who collected Sawyer’s ball powered wide with a half volley from outside the area with five minutes remaining. Tilbury secured the victory two minutes into injury time when the referee awarded the hosts a penalty after Bromwich blocked sub Baralola’s run into the area, with Piers Wixon converting the spot kick, despite Ordonez getting a hand to his kick.

The result ended Soham’s four game winning run, however it was only their second defeat in the last twenty matches, but with Harlow losing, the Greens remain second in the table, now three points behind leaders VDC Athletic.