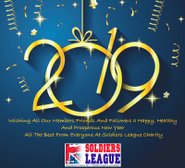 As 2018 draws to a close we look back at what we have successfully achieved throughout the year.

June 15th, a charity tennis fundraiser tournament was held in Qatar many thanks to everyone for taking part and raising £500 for the charity it s very much appreciated.

August, saw us host our biggest and most successful charity dinner and Wembley RL challenge cup excursion to date, we had the great honour to host some of the armed forces wounded, injured & PTSD serving personnel, ex-serving personnel, rugby League sporting legends Kevin Ellis, Allan Bateman, Garry Schofield and our patron Andy Gregory at the Victory Services Club London, Many thanks to all the staff at the VSC for their professionalism, kindness & service shown to all our guest it was second to none we can’t thank you enough. On the night the charity auction and raffle exceeded £3,500. Many thanks to everyone that donated prizes and everyone that placed the winning bids it is very much appreciated.

October over three weekends saw England take on New Zealand in an autumn international series which ended with England winning the series 2 games to 1. As part of our ongoing commitment to the rehabilitation of injured Servicemen and women, The Soldiers League Charity has had the great honour of hosting over 17 wounded or injured serving and ex-serving military personnel and their carers to this series of matches. The Soldiers League charity is dedicated to facilitating that injured military personnel can have access to the sport they played and loved prior to their injury and or illness, either through Physical Disability Rugby League (PDRL), coaching or just getting back onto the terraces as a supporter. Over the three weekends, we had unwavering support from our Patrons, Andy Gregory and his wife Nicola, who have supported the charity since its inception and Lee Crooks who recently joined us and is adding huge value. In addition to our Patrons, Karen Roberts of the RFL has also been a huge supporter of us and we thank Karen and her team for looking after us so graciously at each of the games.
The Soldiers League Charity would also like to thank Phil Clarke, Brian Carney, Joe Lydon, Ben Crooks, James Graham and all of the other Rugby League celebrities who took the time to pose for photos and chat to our injured servicemen and women, it meant a great deal. We would also like to thank Hull FC, Anfield, Elland Rd and their staff for making everyone feel most welcome, your hospitality, patience and support was beyond reproach.

November 30th Ex Pat squaddies organised a five aside football competition in Doha Qatar, AlKhor in a repeat of last years match took the trophy from Barwa in a 60 minute game. All funds raised being donated to the Soldiers League Charity.
Soldiers league would like to thank everyone for their donations, but particular thanks must go to Andy Reid for his efforts and making the event such a success with over £800 being raised on the night.

From the bottom of our hearts the Soldiers League Charity Trustees & Committee would like to say a massive thank you to all that have supported and continue to support Soldiers League Charity, our members, those that have organised sponsored charity events and sponsors of our annual charity dinner your continued support of the charity it is greatly appreciated, without your support we wouldn’t be able to facilitate the rehabilitation, well-being and improving the conditions of life towards helping our wounded, injured & those suffering from Ptsd service men, women & veterans.
We would all like to wish everyone near and far a very happy, healthy and prosperous New Year, we look forward to seeing you all in 2019.
Take care and stay safe.