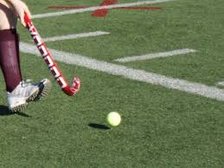 Solihull Blossomfield Ladies 2s – 0, KL Ladies 1s – 2
Solihull Blossomfield Ladies 2s hosted Khalsa Leamingtons 2s (KL) at Lode Heath on Saturday. KL kicked off the game with strong attacking play from the start. Bloss responding with some great defensive play in the D, with plenty of early shots being kept out by, player of the match, Lily Patterson in goal. However, persistence paid off for KL as they finished the first half one nil up from a ball volleyed into the net from the KL forward.
Kicking off the second half of the game Bloss were not defeated - in their minds it’s back to nil - nil and all to play for. Bloss had some great balls fired down the pitch up to the forwards who managed to out skill the KL defence every so often and get a shot on goal but unfortunately no redemption. After a few penalty corners given in the Bloss D, KL managed to secure one more goal and thus securing the win.
Bloss finished the game with their heads held high, standing their ground against a top of the league team. A well fought fight as the game finished with a 2-0 win to Khalsa Leamington 2s.
Share via
FacebookTwitter
https://www.pitchero.com/clubs
Recent news

Meet at 11 at Lode Heath in blue. Please let me know if you have shirts, balls, first aid, bottles. 1s are playing just before if you want to cone early to support.