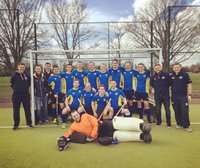 First points on the board for Sonning

Off the back of a not so great start against Chiswick, Sonning wanted to push the home advantage as much as possible against Amersham & Chalfont. The last three times the teams have met all of the wins have gone to Amersham and so Sonning had their work cut out in order to get points from the game.

First blood went to Amersham with a reverse shot from the top of the D. Cleanly struck the ball was clearing the crossbar but Alasdair Allan wasn't so sure from his position and so went to make the save with his stick. Every keepers worst nightmare is to drag the ball with the bottom of the hook back into your own net, especially when it was going wide of the target. Unfortunately that nightmare occurred and Sonning found themselves 1-0 down.

Sonning continued to press hard and push Amersham back with goals from Ian Gallagher and an 80-yard dash up the pitch from Jon Sharp on convert the move he started to make the score 2-1 in Sonning's favour.

In the second half the game opened up more as fatigue set in with it being a very warm day. Sonning doubled their lead through Ian Gallagher but then a sudden flurry of goals brought Amersham back into the game to make it 4-3 who took their chances when they arose.

Sonning refused to back down and in the last 15 minutes of the game scored two goals in quick succession from Jonty Rider and Ian Gallagher who bagged his hattrick.

The final score ended 5-4 meaning Sonning got their first points of the new season.