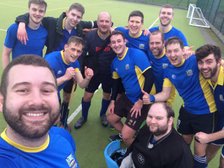 A clean sheet at last

Goaline heroics get us a point

Amazingly, we all managed to get to Brent Cross pretty much on time and enjoy the salubrious surroundings of Whitefield School changing rooms and have a proper team talk and warmup prior to the game starting.
Following a draw earlier in the season we were confident that we could get something out of this game. So it proved, with an end to end battle that I think we shaded in term of possession but, it's fair to say WestHampstead probably had the best chances with a clear miss at the far post at the end of the first half, hitting the post and causing two massive goal line scrambles towards the end of the game. The defensive union of Ali (first clean sheet this year), Billy, Jacob and Bambi somehow managing to keep our 2019 virginity intact.
An awesome performance from Boseley in the midfield was our best hope going forwards with some awesome passes up to Preston up top. Unfortunately, our little legs couldn't quite get him the support he needed so, although we had a few half chances, we didn't manage to create anything really clear despite probably our best 20 minutes of possession so far this season at the start of the second half

A good start to the year getting another point on the board, roll on next week!