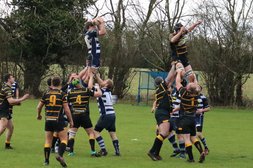 With injury and unavailability causing multiple changes, it was a big ask for a young Southam squad to take on the league leaders.

Southam were definitely more up for it in the 2nd half, but Kidderminster got the first score after a bad bounce from a clearance kick, let the big centre in from 50m for the try. Southam got into the Kidderminster 22 and stayed there, forcing repeated penalties and from another penalty 5m out, fly half Harry Hewson took a quick one and crashed through the cover for the try. Southam put in another period of pressure, but Kidderminster weathered it and broke through on the halfway for a try.
Again Southam worked their way into the Kidderminster 22, but lost the ball and it was spread wide for the big centre to run
it in from 60m. Kidderminster got back into Southam 22 on repeated Southam penalties and from the lineout, the ball was crashed and a some handbags started, the Kidderminster backs ignored it and scored a converted try.
At the death the Southam forwards fought their way into Kidderminster 22 and with some creative lineout work from 2nd row James Rawbone, they moved closer to the line, the forwards drove and from a wide pass to wing Josh Tolley, he grubbed down the line and was then taken out, but Rawbone followed up, reached round the cover to get the try.
FT 10- 53

It was a tough day for the young Southam squad, but they competed well in most area's. Again the forwards worked hard against a big Kidderminster pask, with new boys Adam Webster, Ian Batchelder and Joe Brain, putting in a shift and Rawbone and Richard Lloyd Jones standing out.