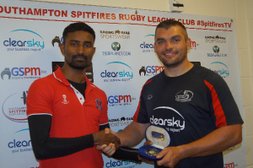 This year's Touch Rugby League has been a huge success. What started out as a trial event on a Monday evening back in May went onto become 16 weekly rounds. Numbers varied each week between 8-20 during Round 9.

Points were awarded for attending, winning games and scoring tries. The TRL Awards will be presented to players along with Men's, Women's and Masters on the 4th of October at the Chilworth Manor Hotel.

Monday evening saw the last TRL session and the chance to present three awards to players who cannot make the actual awards evening. Justin Jose was awarded the Reginald J Mitchell Memorial Medal for his efforts at training and his attendance every week. Since joining touch Justin's skills have improved greatly and he finished off with a massive total of 68 tries in his 12 appearances.

The Spitfires will be announcing the other TRL winners during the rest of this week.