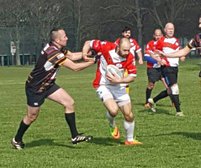 Spitfires Stokes only scorer as Dragons slay Spitfires in 0-0 draw!

On Sunday 14th April the Spitfire Masters flew to Medway to face a well organised Medway Dragons side now in their 10th season.

Medway took an early lead with a display from Ed Baldwin on how to slalom his way through our right edge. Wearing his gold shorts and tags that appeared to be slippery little suckers our defence struggled to get a firm grip on them allowing him through to touch down for the first of two tries on the sunny afternoon at the Garrison Ground.

10 minutes later, the spitfires had settled into the game and had started to play some better and more organised rugby. Completing sets and gaining good territory Southampton were making Medway start their attacking sets from inside their own 20 repeatedly.

On the 5th tackle with just 8 metres away from the Medway try line, Kev Duckham found the run of Adie Smith who was sure to go over to equalise but for a try saving tackle from Medway debutant Jamie, who found the spirit of masters welcoming and was playing firm but fair by executing some great black shorted tackles in the middle of the Medway defence.

The following set, Medway had pushed Southampton back into their own 20 when Peter Stokes intercepted a pass and ran 80 metres to score the Spitfires first touch down of the 2019 season.

The game continued to be played in the spirit of masters with all participants having time on the ball with fun and banter against their opposite number.

The game finished with Medway scoring two more tries while continuing to be pushed by Southampton who continued to get close the Medway try line completing their sets deep into the opposition territory. Regardless of the try count, in the true Masters Spirit the game ended with score bored reading a closely contested 0-0 draw.

Medway then again in true Masters Spirit played host at the local pub where the traveling spitfires received the triple P treatment of Pie, Peas and a Pint.

A big thank you to Medway Dragons Masters for their hospitality from all the Spitfire Masters, who look forward to seeing you again soon.