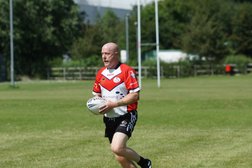 A great game of masters played on the hottest day of the year.
Tim Powley

This game saw Prop Mark Amey graduate from the first grade to Masters to make his 80th club appearance in a Spitfires shirt.

The game kicked off a little late due to the horrendous traffic on the M25, M3 and M27.
With the long journey leaving the centurions little time to prepare their opening period did not go to plan. The Spitfires ran in three tries with their pace our wide causing the visitors problems and excellent handling from the stand in halfback Macca McNeish created the space which found Spitfires Silas Bingley and Pascall Garrard allow them to score.

The second period was more equal, and the Spitfires did not have their own way. With the visitors scoring once from a lovely wide passing move. The Spitfires soon responded when halfback Tyreman stepped inside the defence at first receiver and managed to offload to the supporting Tim Powley who crashed over. Bingley soon after took advantage of some quick hands to score out wide just before the half time break which was well needed on the hottest day of the year.

The third period saw both sides on top in defence and attack with the centurions just edging things as they caused problems on the Spitfires right hand side. This allowed them to score in the corner. Soon after centurions founder Mick O’Shea was involved in some neat passing with the hooker to crash over from close range. With a short water break the Spitfires were soon back on the attacking when Steve Hill’s clever footwork allowed him to break free and run 60 meters to score.

Next on the score sheet was Tim Powley who crossed for his second sprinting 50 meters to outpace the cover defence as Tyreman’s clever inside ball release the fast paced second rower.

The game continued with back and forwards with both teams willing to throw the ball around despite the error count. The Spitfires scored the last try of the game when Tyreman took advantage of some wide gaps and tired legs out on the right edge to cut threw, draw the fullback and release supporting Hooker Steve Hill for his second try of the game. That was to be the last action of the afternoon as the referee blew for full time and a welcomed journey to the bar to refuel.