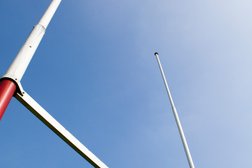 Sat June 8th saw the second Masters Rugby League Festival to be held in Hampshire, again at the home of Millbrook Ruby Union.

In 2017 the first festival saw 30 masters players ascend on the south coast for what was a the inaugural event. This year 54 players attended, split into 5 teams and even though the great British summer tried to ruin our plans by sending us a down poor, everyone was still able to enjoy their rugby with a smile followed by a BBQ and a celebration of rugby for the older gentleman.

The five teams were made up of players from Southampton, Aldershot, Medway, London and Cardiff. Each player got to run around for at least an hour in 20 min games seeing that everyone who attended got their fair share of rugby all played in the true masters spirit.

A huge thank you goes out to Millbrook Rugby Union club who's club house came in very useful when the rain came down, thank you to Active Nation for the pitches and also the RFL Masters group who laid on a referees training course in the morning to qualify all our players as masters referees to enable us to aid in the continuing development of the sport.

To find out how you can get involved please contact Adie Smith on adiesmith@me.com.