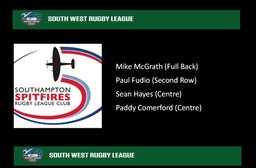 Spitfires involved in West of England Representative side

Coaches and players named in squads

Southampton Spitfires once again were heavily involved in the West of England set up. Last year the club saw it's players battle it out in tough games v South Wales Ironmen, Welsh Presidents XIII, East of England and Ireland Under 20s. The squad was heavily beaten in all the games except Ireland were it picked up its first ever win.

This season the squad was even stronger and included Glenn Tyreman (Director of Rugby) and Mike McGrath, Sean Hayes, Paddy Comerford and Paul Fudio. All four players featured in the game which saw the West knocked out of the Harry Jepson Competition after two loses.

The squad was much improved after losing 34-4 v the East last season.

The remained of the season will see the squad playing a few more games before touring in the early part of 2018.