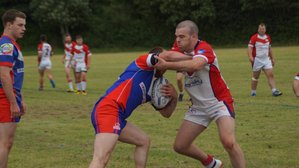 Too many mistakes in the first 40 gave us too much to do to win in the second half.
Glenn Tyreman Head Coach

The Cavaliers arrived at Five Acres unbeaten and left unbeaten. A poor fist half from Spitfires which saw unforced errors, dropped balls, missed tackle and the game plan not been followed saw Oxford race out to an early lead. The Cavaliers in total posted 5 try's and 5 conversions. Some try's were long range and others came from close to the Spitfires line.

The second half was a different story as the Spitfires upped their physicality and defence and held the Oxford side to 0. They also scored a single try from hard running centre Reece Walters. Tom Colling was the coaches pick for man of the match with some strong running and punishing defence.
Next up the Spitfires have their final group game with Portsmouth as they head into the Super 6s section the week after.