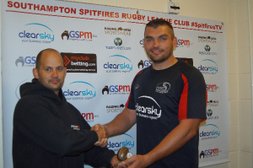 The final Touch Rugby League award was given out at the last session last Monday. This time is was Kevin Duckham who picked up an award for Club Person of the Year for the Touch League.

Kevin has been an ever present at Touch since his arrival late in June. Kevin is also a part of our successful Masters squad and made his debut on the wing against Sussex Merlins in July.

Players Player of the Year - announced on 4th October

Coaches Player of the Year - announced on 4th October

NOT GOT YOUR AWARDS TICKET BOOKED? THERE ARE STILL A FEW PLACES LEFT FOR THE AWARDS ON THE 4TH OF OCTOBER. 3 COURSE MEAL AT THE CHILWORTH MANOR HOTEL. CONTACT GLENN TYREMAN ON 07737804769 TO BOOK YOUR PLACE!